The day after Tisha B’av

The phrase Tisa B’av may be strange to Christians, but it means the Fast of the Ninth. The observance “is a day of mourning to commemorate the many tragedies that have befallen the Jewish people” (Judaism 101). According to this source, five terrible events took place on or near the ninth day of the month Av, the fifth month of the Jewish calendar.

In the past half century a considerable amount of evidence has come to light concerning the destruction of Jerusalem by the Babylonians. The temple destroyed in 586 B.C. had been constructed by King Solomon in about 966 B.C. It was rebuilt by those who returned from the Babylonian Exile (530-516 B.C.).

Herod the Great began about 19/20 B.C. to rebuild the temple. This work was still in progress during the ministry of Jesus.

The Jews then said, “It has taken forty-six years to build this temple, and will you raise it up in three days?” (John 2:20 ESV)

Christians take seriously the prophecy of Jesus preserved by the Jewish writer Matthew.

Jesus left the temple and was going away, when his disciples came to point out to him the buildings of the temple. But he answered them, “You see all these, do you not? Truly, I say to you, there will not be left here one stone upon another that will not be thrown down.” (Matthew 24:1-2 ESV)

Vivid evidence of the Roman destruction of Jerusalem was discovered at the SW corner of the temple area in the Tyropean Valley. Some of the rubble can still be seen on the street which was probably built by Agrippa II in the 60s of the first century. 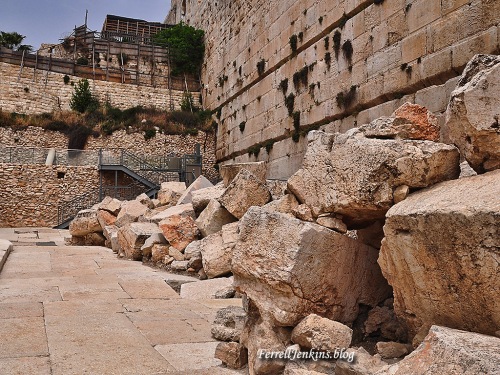 Stones that fell, or were pushed, from the Temple Mount platform to the street below in A.D. 70 at the time of the destruction by the Romans. Photo by Ferrell Jenkins.

As a result of archaeological excavations in Jerusalem since 1967 we have other vivid examples of the destruction of Jerusalem in A.D. 70. Take a look at the ruins of the Burnt House in the Jewish Quarter. These ruins were discovered at a depth of about 20 feet below street level. It is near the Western Wall of the temple and is what is left of a luxurious house belonging to the Kathros family, a family known for the making of incense. A stone weight bearing the phrase “of Bar Kathros” was found in the excavations (Avigad, Discovering Jerusalem, p. 130. The wealth of the family living here is evidenced by the stone table and the stone jars found in the rubble. 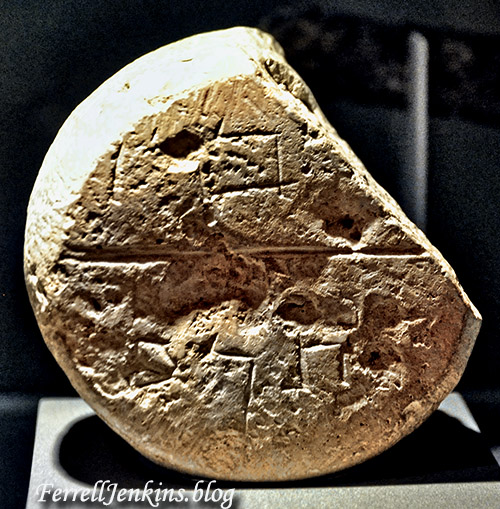 A stone weight with the inscription “of Bar Kathros.” Photo by Ferrell Jenkins.

The stone weight was found among the rubble of the basement work room of the Kathros family. 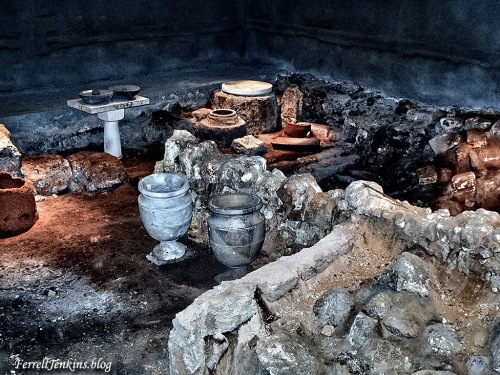 The house of the family Kathros, makers of incense for use in the temple, after the destruction by the Romans in A.D. 70. I have used a filter to highlight the result of the burning. Notice the ashes in the lower left corner. Some of the jars have taken on a silver look but they are stone jars. Do you see the arrow? Click on the photo for a larger image. Photo by Ferrell Jenkins.

It happened just as Jesus said it would.

2 responses to “The day after Tisha B’av”