Ferrell’s Favorite Foto # 29 – the Siq and Treasury at Petra

When I began this series I stated that there was no significance to the order of the photos. Of all the photos I have made and of those recently published I suspect this one would be very near the top. What most tourists see at Petra has little to do with anything in the Bible. The carvings we see there were made mostly by the Nabateans.

The Nabateans have been described as “one of the most gifted and vigorous peoples in the Near East of Jesus’ time” (Wright, Biblical Archaeology 229). They exacted high tolls from the caravans which passed their way. The greatest king of the Nabateans was Aretas IV (9 B.C. to A.D. 40). His rule extended as far north as Damascus during the last part of his reign; this was at the time Paul escaped from Damascus (2 Corinthians 11:32).

I recall the impression walking through the Siq and then the first glimpse of the Treasury carved into the stone. That first trip was 1967, and I have been back several times, the most recent in 2018. I hope you will enjoy this photo made in 2006. 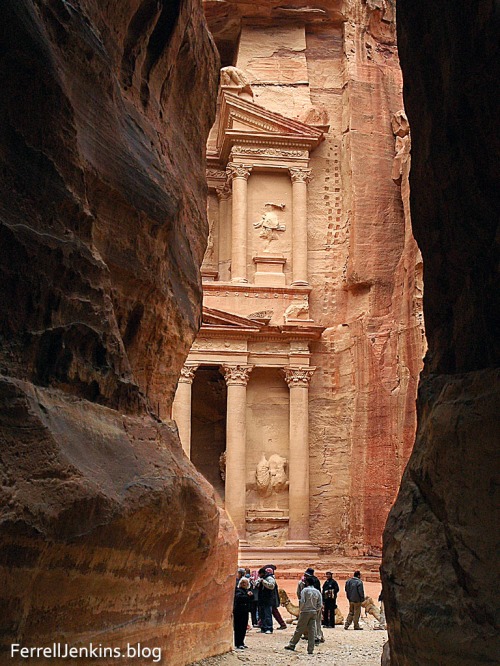 Traveling through the siq at Petra and the first glance of the Treasury. Photo by Ferrell Jenkins 2006.