Not Ziklag, says other archaeologists

Did you read the press release published yesterday about the locating of Ziklag at Tel al-Rai? Perhaps you did not read down to my closing comments. I said,

Certainly there will be much discussion among scholars, some of whom will suggest other possible locations …

Before I continue I think I should say that Prof. Yosef Garfinkel of Hebrew University did not start out trying to locate Ziklag, but he and the others working with him began to see that the evidence they were uncovering seemed to suggest the location of Ziklag.

I first met Garfinkel through Luke Chandler, a former student and friend, who had worked with him in the excavations at Khirbet Qeiyafa, Tel Lachish, and now Tel al-Rai. Professor Garfinkel has presented two lectures at Florida College where I taught for 25 years. Luke and I made a personal study trip to Israel in March/April this year and visited Yossi, as he is affectionately called by friends. He took us down to Dr. Eilat Mazar’s office and introduced us to her, showed us around the archaeology lab at Hebrew University, took us to lunch at the faculty lounge, and visited the campus of HU and the botanical garden with us. I have provided aerial photos to Yosi for his lectures on Lachish. Our visit at HU was educational and pleasant.

Well, today’s newspaper gives attention to the views of Prof. Aren Maeir, and Prof. Israel Finkelstein in response. Maeir, of Bar-Ilan University,  has been directing the excavations at Tel es-Safi/Gath for more than two decades, and Finkelstein, a professor at Tel Aviv University, is known as one of the most outspoken proponents of the so-called “minimalist” school. He is known for his work at various archaeological sites.

I refer you to the well-written article of Amanda Borschel-Dan in today’s The Times of Israel for that story.

My article today is neither to defend nor dismiss Tel al-Rai = Ziklag. I have known for years that there have been numerous suggestions for the identity of Ziklag. In fact, back in 2009 Leon Mauldin and I visited Tel Halif, north and slightly east of Beersheba,  and Tel Sera, northwest of Beersheba, because we knew they had been suggested as Ziklag.

The late Professor Anson F. Rainey held that Ziklag should be identified with Tell esh-Shariah, now known as Tel Sera. His four pages (147-150) in The Sacred Bridge would be equivalent to 12 or more pages in many publications.

Leon and I spent a long time driving through fields along the banks of Nahal Gerar till we located Tel Sera. 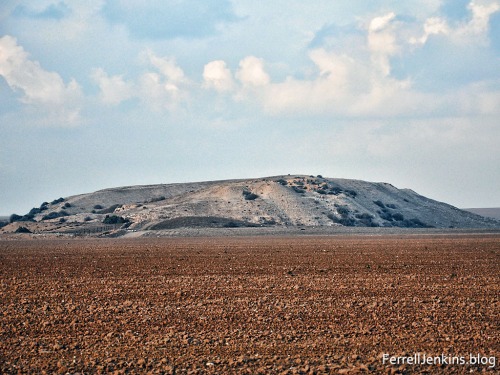 Tel Sera, identified as Ziklag by Anson Rainey. This late afternoon view is to the north. Nahal Gerar, or one of its tributaries, is hidden between the field and the tel. Photo by Ferrell Jenkins.

Archaeologists work with a hypothesis as long as they think it can be sustained, but when new information comes along they move with it.

We may never know the exact location of Ziklag, but I know enough about the Bible to believe that the account of David at Gath, Ziklag, and Jerusalem is one I can hold to.