Dibon and the Moabite (or Mesha) Stone

The green hill just above the center of the photo is the ancient site of Dibon. The view to the east shows the modern town of Dhiban, Jordan, in the distance. Photo by Ferrell Jenkins.

Dibon is known today at Dhiban in Jordan. The Moabites were the descendants of Lot, the nephew of Abraham (Gen. 19:37). They settled east of the southern portion of the Jordan River and the northern half of the Dead Sea. There were battles between Israel and Moab during the reigns of Saul and David, but David defeated Moab “and the Moabites became servants to David, bringing tribute” (2 Samuel 8:2). This payment of tribute evidently continued until after the death of Ahab; the Bible records at that time “the king of Moab rebelled against the king of Israel” (2 Kings 3:4ff.).

This photo shows some of the ruins on the summit of ancient Dibon. Photo by Ferrell Jenkins.

In about 835 BC Mesha, king of Moab, set up a stone to the Moabite god Chemosh (Kemosh) to commemorate his deliverance from the Israelite bondage. This stone, the only Moabite inscription of any significance, was found about 13 miles east of the Dead Sea at Dibon.  It was first discovered by Anglican missionary F. A. Klein in 1868. Klein copied a few words and sought to buy the stone for the Berlin museum for about $400. When the French scholar Clermont-Ganneau learned of the stone he sent an Arab to take a squeeze (a facsimile impression) and offered the natives more than $1,800 for it. The Arabs became suspicious and heated the stone and then poured cold water over it causing it to break into pieces. The natives then distributed the fragments among themselves as amulets and charms. At a later time Clermont-Ganneau was able to recover most of the broken pieces. The original stone of bluish black basalt, two feet wide and nearly four feet high, is now in the Louvre in Paris. Here are a few of the many resources reporting this information: Price, Sellers and Carlson, The Monuments and the Old Testament, 241; The Context of Scripture, Vol. II: 137-138; Jack P. Lewis, Early Explorers of Bible Lands, ch. 7 on Charles Clermont-Ganneau.

The inscription itself mentions David*, Omri, and his son (Ahab, or his grandson Jehoram). Finegan lists 14 places mentioned in the Moabite Stone which are also named in the Bible (Finegan, LAE, 189). The portion of the inscription which tells about the rebellion mentioned in 2 Kings 3:4ff. reads as follows:

Omri was the king of Israel, and he oppressed Moab for many days, for Kemosh was angry with his land. And his son7 succeeded him, and he said — he too — “I will oppress Moab!” In my days did he say [so], but I looked down on him and on his house, and Israel has gone to ruin, yes, it has gone to ruin for ever! (K. A. D. Smelik in Context of Scripture, Vol. II: 137-138)

*André Lemaire argues, based on the recently cleaned squeeze of the Mesha Stela, that line 5 mentions the “house of Israel” and line 31 mentions the “house of David.” Both of these kingdoms are also mentioned in the stela discovered by Avraham Biran at Tel Dan. (“House of David” Restored in the Moabite Inscription, BAR 20:03 (May/June 1994). Lemaire’s translation of the inscription is included with the article. 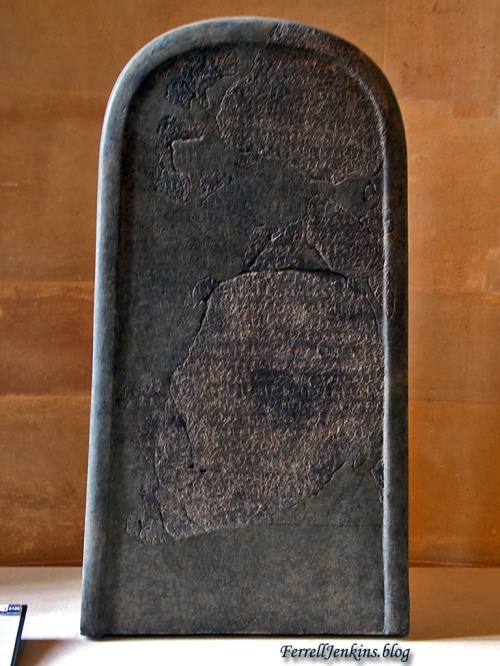 The Mesha or Moabite Stone displayed in the Louvre, Paris. Photo by Ferrell Jenkins.