Was Philip martyred at Hierapolis/Pamukkale?

A recent article by an Italian journalist Giuseppe Mancini in al-Monitor caught my attention earlier this week. He says,

Hierapolis is the most popular archaelogical site in Turkey, with its peak of 2 million tourists in 2014 and a comparable number anticipated for 2018. In fact, most of them — largely Russians on day trips from Antalya — see only the natural features of the place: the white cascades of travertine created by thermal waters flowing downhill. The venue is better known in Turkish as Pamukkale, literally the “cotton castle,” whose light blue natural pools are featured in every tourism brochure.

Mancini discusses the archaeological work done by Italian scholars. In 2011 they were convinced that they had located the tomb of Philip the Apostle (Matthew 10:3). He laments that most of the tourists visit only a limited area of Pamukkale.

Few tourists walk the paved roads among the ruins or sit in the well-preserved theater. Fewer still are adventurous enough to climb the steep hill overlooking Pamukkale and Hierapolis — guides apparently advise against going there — where the Christian St. Philip the Apostle was killed, buried and venerated for many centuries.

I have observed the same thing and understand the reasons. (1) The tomb of Philip is an archaeological site. (2) It is a relatively long distance from the cascades, pools, and shops. (3) Tour groups are limited in time and (4) the greater number of tour members would not take time to visit a site like this. Let me show you.

You will be able to see the buildings dedicated to Philip right of the center of the photo on the top of the hill. First you get to walk on ruins of an ancient road. 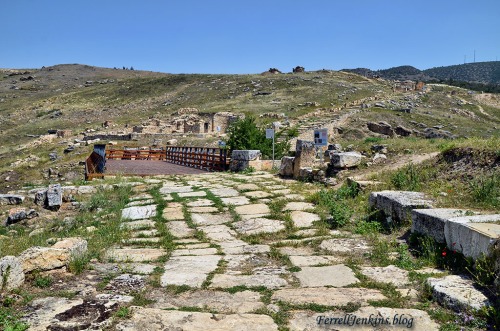 After walking a rather long distance to the approach to the Martyrium of Philip, we pass through the Byzantine walls of Hierapolis. Photo by Ferrell Jenkins.

But that is not all. Next you must climb these steps to a plateau near the tomb and complex of buildings. 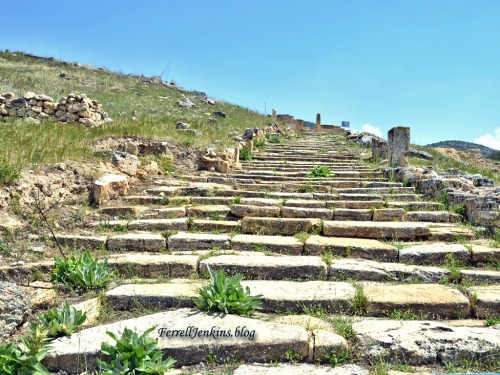 Tradition associates these steps with the Martyrium of Philip the Apostle. Photo by Ferrell Jenkins.

When you think you have almost arrived, you see steep steps that must be climbed to the plateau where the Martyrium is located. 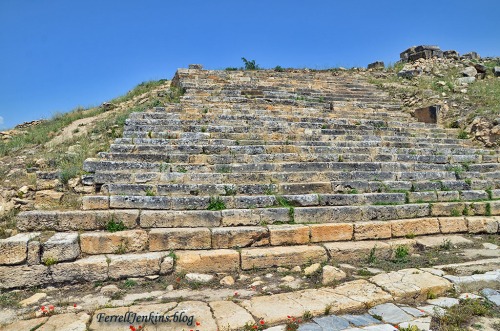 The final steps leading to the Martyrium of Philip. Photo by Ferrell Jenkins.

Then you come to the ruins of the church where pilgrims came to honor Philip.

Pilgrims came to this building to honor Philip. Photo by Ferrell Jenkins.

There is another building of significance at the site. It is an octagonal building said to have been where Philip was martyred. Only the strongest portions of the building stand.

The Martyrium of Philip was constructed in the early 5th century A.D. on the site thought to be where Philip was martyred. Photo by Ferrell Jenkins.

The martyrium was apparently used neither as a church (no altar has been found) nor as a burial site (no tomb has been found) but rather served as a place for processions and special services in honor of the saint. (A Guide to Biblical Sites in Greece and Turkey, p. 215).

According to Fatih Cimok these building were destroyed by fire in the 6th century and never rebuilt (Biblical Anatolia, p 160).

A number of crosses are found at the site engraved on various stones. Cimok says,

Inscriptions speak of “the people of the Jews,” “the settlement of the Jews who dwell in Hierapolis,” and “The archives of the Jews.” (Ibid.) 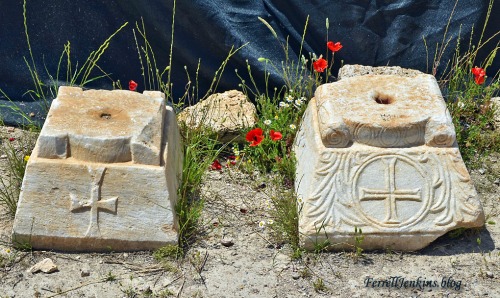 Crosses on column bases in the Martyrium of Philip at Hierapolis. Photo by Ferrell Jenkins.

There is much more to see at Hierapolis, including a small but nice museum. Perhaps at a later time I will show you the Hellenistic Theater, the street and arch dedicated to Emperor Domitian, and some of the elaborate tombs. In fact, some have been discussed before. You may locate the posts by typing Hierapolis or Pamukkale in the Search Box.

Resources: In addition to sources cited here, I cited Mark Wilson’s Biblical Turkey in the previous post. These are wonderful resources to use in preparation for a trip to Turkey.

3 responses to “Was Philip martyred at Hierapolis/Pamukkale?”