The Shema Seal from Megiddo

Perhaps you have seen a drawing or a photo of a replica of the Shema Seal. Professors Israel Finkelstine and David Ussishkin, directors of the most recent major excavation at Megiddo, tell us about the discovery.

The first excavation of the site was undertaken between 1903 and 1905 on behalf of the German Society for the Study of Palestine by Gotlieb Schumacher, an engineer who lived in the German community of Haifa. Schumacher cut a 65-foot-wide trench across the mound from north to south and a number of smaller trenches in other parts of the site, identifying six building levels. His most famous find is a jasper seal portraying a roaring lion and inscribed “(belonging) to Shema, servant of Jeroboam.” Shema was apparently a high official of the king of the northern kingdom, either Jeroboam I (end of tenth century B.C.E.) or Jeroboam II (eighth century B.C.E.). This striking emblem of a powerful lion was sent by Schumacher to the Turkish Sultan in Constantinople, who kept it there in his royal collection. It is not clear what happened to it later, but today its whereabouts are unknown. (“Back to Megiddo.” Biblical Archaeology Review, Jan/Feb 1994).

McKinny dates the reign of Israelite king Jeroboam II from 793 to 753 B.C. He says there was a sole reign of 29 years and a joint reign of 12 years with Jehoash (Regnal Chronology of the Kings of Judah and Israel: An Illustrated Guide, 21). The biblical reference says,

On one of my earliest tours, either 1967 or shortly thereafter, I purchased a metal desktop paper weight replica of the Shema seal. It may have been at the shop at Megiddo or at the Rockefeller Museum. It is certainly larger than the original jasper seal. The photo which I recently made of my “seal” is slightly different in detail from the one included in Ussishkin’s study in Coogan, et al., Scripture and Other Artifacts, 410-428. (See also Pritchard, The Ancient Near East: An Anthology of Texts and Pictures, 75.) 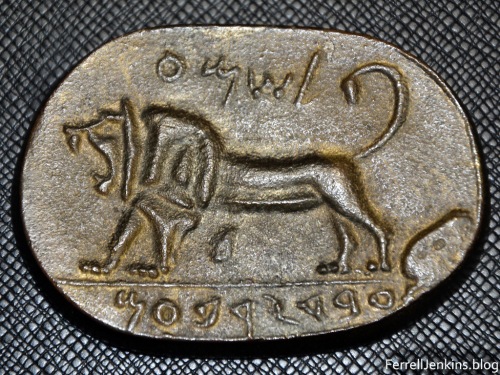 This is a replica that I bought during one of my earliest trips, perhaps in 1967. I think it may have been at Megiddo or at the Rockefeller Archaeological Museum in Jerusalem. Photo by Ferrell Jenkins.

The seal of Shema is an unpierced scaraboid of jasper measuring 37 by 27 by 17 mm; it portrays a roaring lion and contains the inscription … “(belonging) to Shema, servant of Jeroboam.” (419)

I thought this photo might be useful to teachers who like to have good images to use in their classes.

5 responses to “The Shema Seal from Megiddo”