That’s the way the Israel Antiquities Authority press release this morning begins. Teasers had caused us to believe that something big was coming. Now we have more details that can be shared.

Excavations conducted by the Israel Antiquities Authority, with the participation of volunteers, have uncovered large portions of courses of the Western Wall that have been hidden for 1,700 years. An ancient Roman theater-like structure was exposed for the first time.…

Eight stone courses of the Western Wall that had been buried under an 8-meter layer of earth were recently uncovered in excavations conducted by the Israel Antiquities Authority in the Western Wall Tunnels in Jerusalem.  These stone courses, completely preserved, are built of massive stones and are outstanding in the quality of their construction.

Eight courses of the Western Wall were discovered in the excavation. Photograph: Yaniv Berman, courtesy of the Israel Antiquities Authority.

Furthermore, after the removal of this layer of soil, the archaeologists were surprised to discover that it covered the remnants of an extraordinary theater-like structure from the Roman period confirming historical writings that describe a theater near the Temple Mount.  These exciting findings will be presented to the public during a conference titled New Studies in the Archaeology of Jerusalem and its Environs, which will take place at the Hebrew University. This year’s conference will mark 50 years of archaeology since the unification of the city.

At a press conference this morning (Monday) beneath Wilson’s Arch in the Western Wall Tunnels, the stone courses and the amazing remnants of the theater were presented. Apparently, a great deal was invested in the construction of the theater which contained approximately 200 seats. The press conference was conducted with the participation of the Western Wall rabbi, Rabbi Shmuel Rabinowitz, Israel Antiquities Authority director, Israel Hasson, Western Wall Heritage Foundation director, Mr. Mordechai (Suli) Eliav, Israel Antiquities Authority district archaeologist Dr. Yuval Baruch, and the excavation directors. 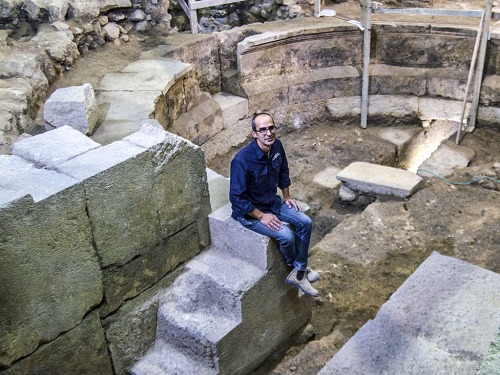 From the very beginning of archaeological research in Jerusalem over 150 years ago, scholars have been seeking the public buildings mentioned in the historical sources. Particularly prominent among them, theaters or theater-like structures are mentioned. These descriptions are found in written sources from the Second Temple period (such as Josephus Flavius), and in sources from the period following the destruction of the Second Temple, when Jerusalem became the Roman colony of Aelia Capitolina. Many theories were advanced as to the location of these complexes, but they were without archaeological foundation. That is, until this latest discovery.

Wilson’s Arch is in fact the only intact, visible structure remaining from the Temple Mount compound of the Second Temple period. The arch, built of enormous stones, is the last of a series of such arches that once constituted a gigantic bridge leading to the Temple Mount from the west.

The arch stands high above the foundations of the Western Wall, and it served, among other purposes, as a passageway for people entering the Temple Mount compound and the Temple. A huge aqueduct also passed over the arch.

According to site excavators Dr. Joe Uziel, Tehillah Lieberman and Dr. Avi Solomon: “From a research perspective, this is a sensational find. The discovery was a real surprise. When we started excavating, our goal was to date Wilson’s Arch.  We did not imagine that a window would open for us onto the mystery of Jerusalem’s lost theater. Like much of archaeological research, the expectation is that a certain thing will be found, but at the end of the process other findings, surprising and thought-provoking, are unearthed. There is no doubt that the exposure of the courses of the Western Wall and the components of Wilson’s Arch are thrilling discoveries that contribute to our understanding of Jerusalem. But the discovery of the theater-like structure is the real drama.”

The excavators note: “This is a relatively small structure compared to known Roman theaters (such as at Caesarea, Bet She’an and Bet Guvrin). This fact, in addition to its location under a roofed space – in this case under Wilson’s Arch – leads us to suggest that this is a theater-like structure of the type known in the Roman world as an odeon. In most cases, such structures were used for acoustic performances. Alternatively, this may have been a structure known as a bouleuterion – the building where the city council met, in this case the council of the roman colony of Aelia Capitolina – Roman Jerusalem.”

Interestingly, the archaeologists believe the theater was never used. A number of findings at the site indicate this – among them a staircase that was never completely hewn. It is clear that great effort was invested in the building’s construction but oddly, it was abandoned before it was put to use. The reasons for this are unknown, but they may have been connected to a significant historical event, perhaps the Bar Kokhba Revolt; construction of the building may have been started, but abandoned when the revolt broke out. Additional evidence of unfinished buildings from this period has been uncovered in the past in the excavations of the Eastern Cardo in the Western Wall Plaza.

Numerous findings have been unearthed in the excavations beneath Wilson’s Arch, some of which are unique, including pottery vessels, coins, architectural and architectural elements, and more. Advanced research methods from various fields were employed to uncover remains invisible to the naked eye, but only viewable through a microscope. This enables conclusions to be drawn at a level of precision that would have been impossible in the past, transforming the study of the findings at Wilson’s Arch into pioneering, cutting-edge micro-archaeological research.

The major Israeli papers have covered this announcement, sometimes with their own photos, and I expect that other news outlets will do the same. Here are links to The Times of Israel, Haaretz, and The Jerusalem Post articles. Todd Bolen has summarized the information here, and Luke Chandler has included many other photos showing the Western Wall Plaza here.

This short video (less than 4 minutes) will give you a good concept of the newly excavated area.