A little more than two years ago I wrote two posts about the discovery of Solomon’s Quarries (also called Zedekiah’s Cave) here and here. I will reproduce only a few comments from those articles in hope that you will check them and the many photos I have included there. 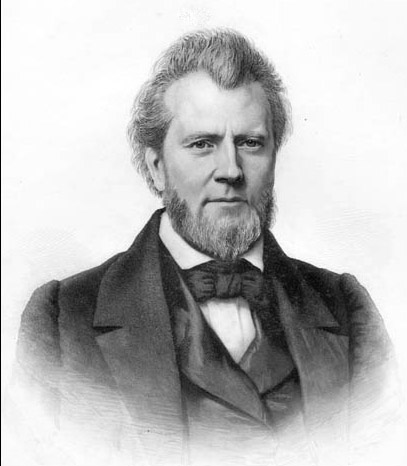 Portrait of Dr. James Turner Barclay engraved by John Sartain. This image may also be found on the Scottsville Museum (Virginia) web page here. The photo is from Barclay’s book, The City of the Great King (1858).

Dr. James Turner Barclay was sent to Jerusalem by the American Christian Missionary Society in 1851 as a medical and evangelistic missionary. During his first trip he stayed until 1854 and returned for a second stint from 1858 to 1861. Barclay was active in medical work, treating more than 2,000 cases of malaria during his first year in the city.

Barclay is known not only for the aforementioned discovery but for the discovery of an ancient gate in the Western Wall now known as Barclay’s Gate. I gathered all of my sources to write about that when I wrote the previous articles, but eventually had to put the books away to make room for something else. Perhaps someday.

While admitting mistakes that Barclay made in those early days, Dr. Jack P. Lewis says,

The significant steps that Barclay took toward the scientific study of Jerusalem will keep his contribution to scholarship from being forgotten. (Biblical Archaeologist, 1988).

A few decades ago a church in Atlanta, Georgia, provided two stained glass windows for the Cathedral of St. George to honor and maintain the memory of Dr. Barclay. The Cathedral is the seat of the Episcopal Church bishop of Jerusalem. Our first picture shows the courtyard and entrance along Nablus (formerly Damascus) Road. It is near the famous American Colony Hotel and other well-known tourist hotels (e.g., the Grand Court Hotel where many of my groups have stayed). 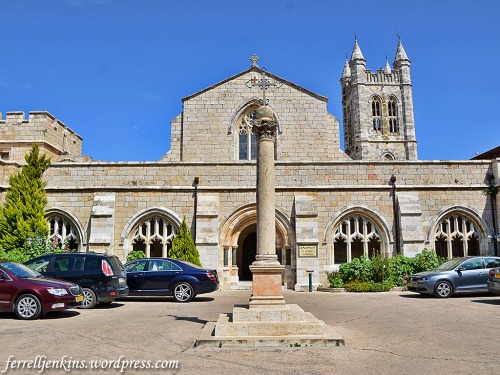 The courtyard and entrance to St. George Cathedral in east Jerusalem. Photo by Ferrell Jenkins. 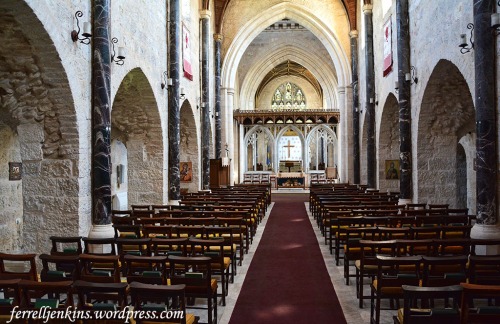 The interior of the St. George Cathedral. The stained glass windows are on the left side. Photo by Ferrell Jenkins.

There are two other windows depicting the naming of John the Baptist and the preaching by John of “a baptism of repentance.” The ones we show below are the ones honoring Dr. Barclay. The window on the left bears the title “Jesus was baptized by John in the Jordan” and the one on the right has “John heard in prison about the deeds of Jesus” as a title. John is holding a manuscript with a portion of the text of Matthew 11:4-6.

And Jesus answered them, “Go and tell John what you hear and see: 5 the blind receive their sight and the lame walk, lepers are cleansed and the deaf hear, and the dead are raised up, and the poor have good news preached to them. 6 And blessed is the one who is not offended by me.” (Matthew 11:4-6 ESV) 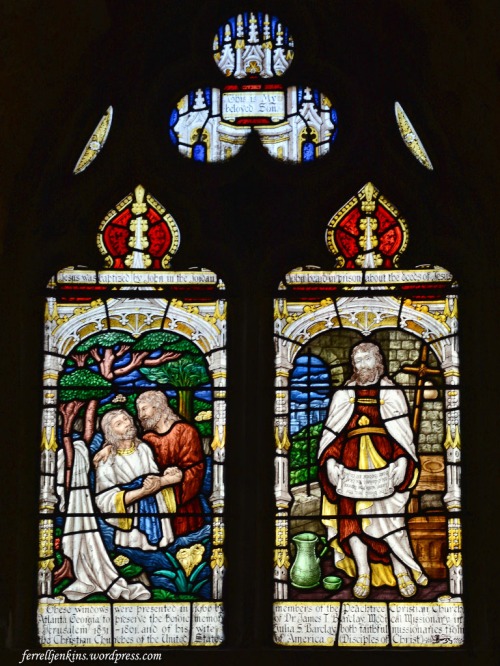 The dedication reads across both windows:

These windows were presented in 1966 by members of the Peachtree Christian Church, Atlanta, Georgia, to preserve the heroic memory of Dr. James T. Barclay, Medical Missionary in Jerusalem 1851–1861, and of his wife Julia S. Barclay, both faithful missionaries from the Christian Churches of the United States of America. (Disciples of Christ).

I have made mention of the Restoration Movement, sometimes called the Stone-Campbell Movement, at other times. Just as a matter of record, my life’s work has been among more conservative Churches of Christ, rather than among Christian Churches or Disciples of Christ. The introduction of the American Christian Missionary Society was one of the things that precipitated the division.

It is good to see the work of men like Barclay honored by whomever wishes to do so.

As a courtesy to those who would like to use these photos in teaching, you may click on them for an image suitable for PowerPoint presentations.