The wild goat of the Bible identified as the Ibex

The ibex, a type of wild goat, is still found in Southern Palestine, Sinai, Egypt and Arabia; it was known also in ancient times, as is evident from rock carvings. (Fauna and Flora of the Bible, 46).

The wild goats are associated with En Gedi on the shore of the Dead Sea.

Now when Saul returned from pursuing the Philistines, he was told, saying, “Behold, David is in the wilderness of Engedi.” Then Saul took three thousand chosen men from all Israel and went to seek David and his men in front of the Rocks of the Wild Goats. (1 Samuel 24:1-2 NAU)

Our photo below was made at En Gedi. 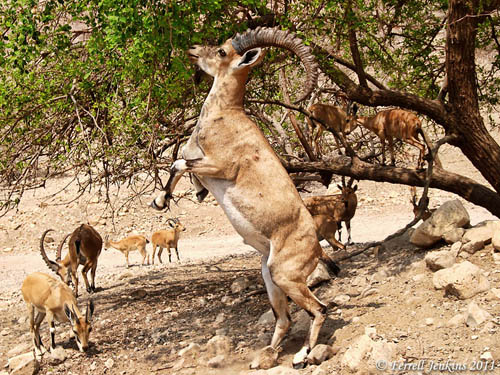 A large Ibex at En Gedi. Photo by Ferrell Jenkins.

The Psalmist says the high mountains are for the wild goats.

The high mountains are for the wild goats; The cliffs are a refuge for the shephanim. (Psalm 104:18 NAU)

The final photo today shows an Ibex on the high rocks of the Negev near Ein Avedat, about 40 miles south of Beersheba. She has paused for her little one. Look carefully below the neck of the mother. Only the head of the kid is visible. Click on the photo for a larger, clearer image.

An Ibex in the Negev near Ein Avedat. Photo by Ferrell Jenkins.