October 31 is known as Reformation Day because it was on this day in 1517 that Martin Luther posted Ninety-Five Theses on the door of the Castle Church in Wittenberg, Germany. The Ninety-Five Theses were issues that Luther thought should be debated by the theologians. These questions were brought about due to the sale of indulgences and general corruption within the Roman Catholic Church.

The term Protestant was not used to describe those who aligned themselves with Luther for another 12 years, but the Protestant movement can be dated the the event at Wittenberg.

There are many issues on which I would differ with Luther, but I admit that I admire the man and the stand that he took against practices of his day which were departures from the Apostolic doctrine.

This statue of Luther stands in the Castle Church in Wittenberg, Germany. The official name of the town is Lutherstadt Wittenberg. 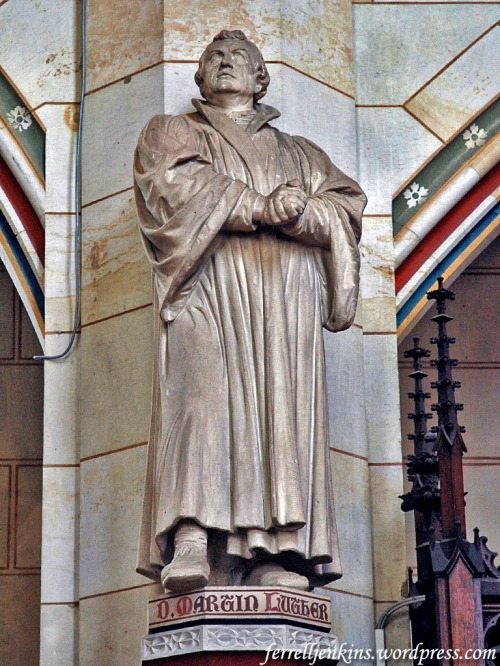 Luther Statue in the Castle Church in Wittenberg. Photo by Ferrell Jenkins.

Our Alpine Europe tour visited Worms, Germany, in 2015. At that time the park where the Luther Monument is located was under repair in anticipation of the 500th anniversary of the Reformation. I was able to crop out the repair work and keep a nice photo of the Monument. 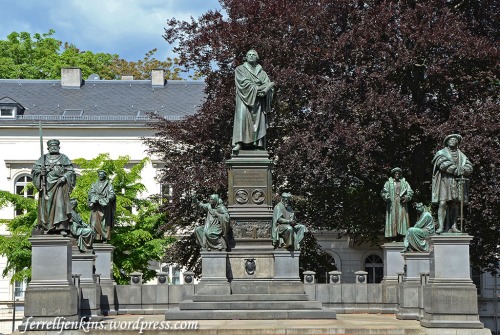 This Monument in Worms, Germany, is the largest Luther Monument in the world. The park has been under repair for the 500th anniversary. Photo by Ferrell Jenkins.

In preparation for that tour I found this description of the Luther Monument here. The link is now broken, but the site still includes a photo of the Monument here.

Description of the Luther Monument

The Luther Monument in Worms is the largest Luther Monument in the world. The elaborate sculpture group centers on Martin Luther, who is flanked by Frederick the Wise of Saxony and Philip of Hesse, two powerful princes who played a major role in the political success of the Reformation. Behind Luther are Johannes Reuchlin and Philipp Melanchthon, two important Protestant scholars, and at his feet are forerunners of the Reformation: Peter Waldo, John Wycliffe, Jan Hus and Girolamo Savonarola. The seated women personify the first German cities to adopt Protestantism and between the wall and the statue of Luther are the names of other towns that played an important role in the Reformation.

We have photos and bits of information about other Reformation leaders scattered here and there on the blog. You may search for the Reformation, or some specific leaders such as Savonarola, Zwingle, Knox, Bullinger, Restoration Movement, etc.

Steven Braman, a friend and fellow-traveler/blogger, travels to Germany in his work. He has written several posts about the Reformation. Begin here and find a list of his most recent posts.

Like Loading...
This entry was posted in Church History, Photography, Restoration Movement, Travel and tagged Reformation. Bookmark the permalink.

One response to “Reformation Day 2016”