The Citadel of Jerusalem

The Citadel at Jaffa (Joppa) Gate in the west wall of the Old City of Jerusalem provides one of the most distinctive and memorable views of the city.

This view of the Citadel was made from the west, looking across the north-south stretch of the Hinnom Valley. Photo by Ferrell Jenkins.

The distinctive square tower (with the flag) is popularly known as the Tower of David, even though the Citadel never had anything to do with David.

The photo below shows the towers of the citadel as they are reconstructed in the Second Temple Model at the Israel Museum. The informative booklet describing the model identifies the towers as follows:

Josephus describes these towers in The Jewish War V:161-183.

The three towers of the Citadel from the time of Herod the Great. Photo by Ferrell Jenkins.

Our next photo provides a nice aerial view of the present condition of the Citadel. On the left you see Jaffa Gate, the only entrance to the Old City from the west. Notice the red-roofed building on the extreme right of the photo, with parking further to the right. That is the Kishle, the Old City Police Station. More about that in a future post. The Tower of David Museum is housed in the Citadel. The TOD web site may be accessed here. Click on Citadel for information related to this post.

Aerial photo of the Citadel. Photo by Ferrell Jenkins.

The Citadel has undergone several archaeological excavations. Here is a brief list as discussed by Renée Sivan and Giora Solar in Ancient Jerusalem Revealed, ed. by Hillel Geva (1994).

The photo below provides a view of the interior of the Citadel from the Tower of David. Within this area we have ruins from the various archaeological/historical periods mentioned above, covering a period of about 2700 years. 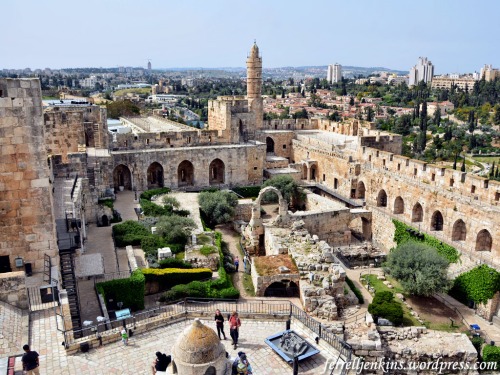 Interior southwest view of the interior of the Citadel from the Tower of David. Photo by Ferrell Jenkins.

Before leaving the article by Sivan and Solar, allow me to mention that the Tower of David was exposed to the bedrock during their excavation, “except for its north-western corner which was built on small stones and debris.” The bedrock at this point is 766.65 meters (2515.26 feet) above sea level.

Everyone who reads this blog probably knows that the walls surrounding the Old City of Jerusalem date to the Turkish period, built in the 16th century A.D.

More about the Citadel and a visit to the Kishle in post(s) to come. The photos in this post are sized for use in PowerPoint presentations for the classroom. I hope some of you will find them useful. Publication requires the usual licensing.