Some repair photos at the Holy Sepulcher

In the last post we mentioned the long-needed repair of the shrine (edicule) in the Holy Sepulcher, the traditional site of the tomb in which Jesus was placed after the crucifixion.

One of my traveling friends, Steven Braman, just returned from the excavation at Lachish. He offered to send some photos he made within the Holy Sepulcher on June 24th. I am sharing two of these with our readers. 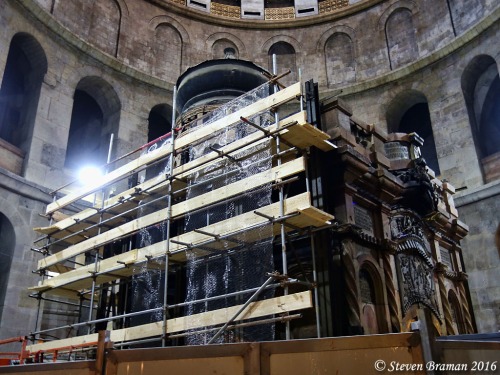 Tim Blamer, one of our readers, left this comment.

I was there last week. The scaffolding and construction is quite extensive now. Any peace and tranquility that was in the church is now overwhelmed by the sound of construction and heavy equipment moving around. People could still go in to view the tomb, but it’s clear something major is being done.

Thanks to Steven and Tim. I never observed much “peace and tranquility” in the church.

3 responses to “Some repair photos at the Holy Sepulcher”