Galilee from Mount Arbel at dusk

The photo below is one I made from Mount Arbel shortly after sundown on a December day a few years ago. Haze often covers the Sea of Galilee, but my experience is that it tends to clear in the late afternoon. 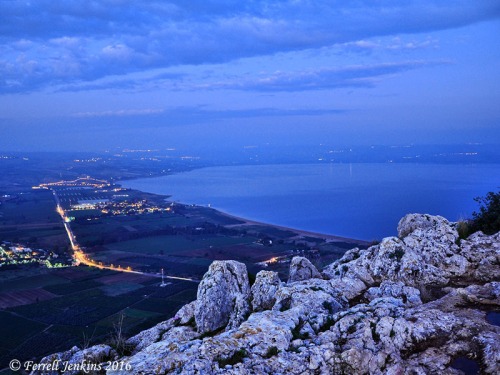 View from Mount Arbel showing the northern end of the Sea of Galilee shortly after sunset. Photo by Ferrell Jenkins.

From Mount Arbel we see the Plain of Genessaret below to the north (left). On the north end of the Sea of Galilee we have the sites of Tabgha and Capernaum, with the Mount of Beatitudes on the hill above the lake. Chorazin is a few miles up the hill. Magdala is below Mount Arbel about where the large shrub is showing on the right. Tiberias is further to the south (right). Across the lake we have the Plain of Bethsaida and the Golan Heights.

Much of the earthly ministry of Jesus took place in this vicinity, and He often worked at this time of day when it was cooler.

When it was evening, many demon-possessed people were brought to him. He drove out the spirits with a word, and healed all who were sick. In this way what was spoken by Isaiah the prophet was fulfilled: “He took our weaknesses and carried our diseases.” (Matthew 8:16-17 NET)

3 responses to “Galilee from Mount Arbel at dusk”