Earlier this week the Israel Antiquities Authority and the Police arrested a man living near Beit Shean (Bethshan) with some pottery and more than 3000 coins that he was illegally trying to sell. One report says the coins dated from the Roman period, the Bar Kochba revolt, the Byzantine period, and the Muslim period. The Roman coins included some from the time of the Roman destruction of Jerusalem in A.D. 70. These coins bear the title “Judaea Capta.” 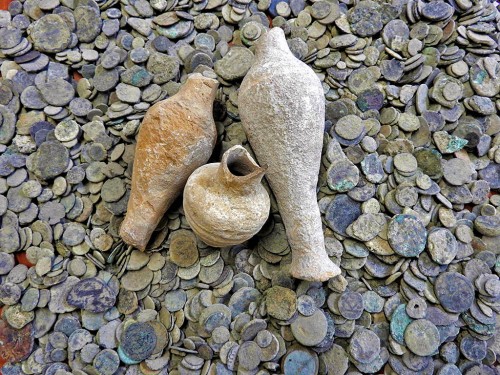 The unnamed “dealer” had been digging up the coins and pottery in fields in the vicinity of Beit Shean. For additional information about Beit Shean see our post here.

There are legitimate dealers in antiquities, but there are others who take advantage of unsuspecting buyers. Many antiquities are destroyed by those who do not appreciate the value of the artifacts.

For a copy of the IAA Hebrew press release go here. For an informative English article with several photos see the article in The Times of Israel here.