A few weeks (months?) back, after a long wait, I received the 5-volume A Dictionary of the Bible, ed. by James Hastings, in Logos format. I have mentioned earlier that this is an old set that is not a substitute for owning newer materials. The fifth volume is an Extra Volume that includes some special studies. William M. Ramsay wrote sections on Roads and Travel in the New Testament. This material was published in 1911 and 1912.

Ramsay also wrote the Dictionary entry on Troas. Here I will share a few excerpts from that material that I think will illustrate the value of such material.

TROAS (Τρῳάς, or more correctly Ἀλεξάνδρεια ἡ Τρῳάς [Alexandria Troas]) was a city on the Ægean coast of Asia Minor, opposite the small island of Tenedos. The district in which it was situated was sometimes called as a whole Troas, and is in modern times generally called the Troad; it was the northwestern part of the land of Mysia….

It became one of the greatest and largest cities of the north-west of Asia. In the coasting voyage system of ancient navigation, it was the harbour to and from which the communication between Asia and Macedonia was directed (cf. Ac 16:8, 20:5, 2 Co 2:12). Owing to the greatness of Troas and its legendary connexion with the foundation of Rome, the idea was actually entertained by Julius Cæsar of transferring thither the centre of government from Rome (Suet. Jul. 79); and some similar scheme was still not wholly forgotten when Horace protested against it in Od. iii. 3. Hadrian probably visited Troas and it was perhaps his interest in it that led the wealthy and politic Herodes Atticus to build there an aqueduct (the ruins of which were imposing in very recent times) and baths….

The route followed by St. Paul, with Silas and Timothy, from the Bithynian frontier near Dorylaion or Kotiaion, brought the party to the coast at Troas (Ac 16:6–8). There can be little doubt that this road led down the Rhyndacus valley past the hot springs Artemaia, sacred to Artemis, on the river Aisepos. 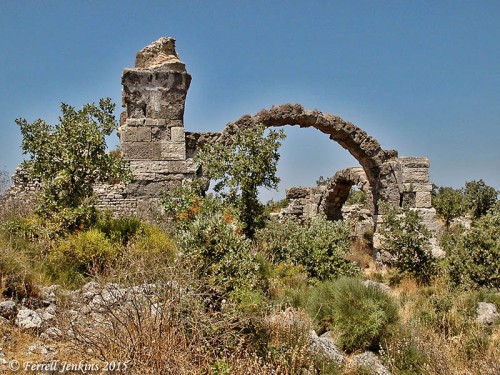 Ruins of the Bath of Herodes Atticus at Troas. Photo by Ferrell Jenkins.

Don’t confuse the Herodes Atticus mentioned here with the Herod’s of the New Testament. Herodes Atticus was a wealthy Greek from Athens who later became a Roman senator. The dates for his life are given in several sources as about A.D. 101–177. Those who have visited Athens may recall seeing the Odeon of Herodes Atticus on the slopes of the Acropolis.

The Odeon of Herodes Atticus on the slope of the Acropolis. Photo by Ferrell Jenkins.