Capernaum has a new look

On our recent visit to Israel we visited some places we have been many times because of changes we expected to see. Capernaum was beginning to undergo some renovations when we were there in 2013.

If first impressions are important, then Capernaum is now making a good first impression with the new entrance sign. You will observe that the ticket booth also has a new look. Since this is a private site, owned by the Franciscans, there is a small entry fee.

The new entrance to Capernaum (Capharnaum). Photo by Ferrell Jenkins.

Instead of immediately moving into a crowded area to look at some of the architectural fragments excavated at the site, you have this beautiful plaza facing the Sea of Galilee. My photo can not do justice to the beauty of this site. 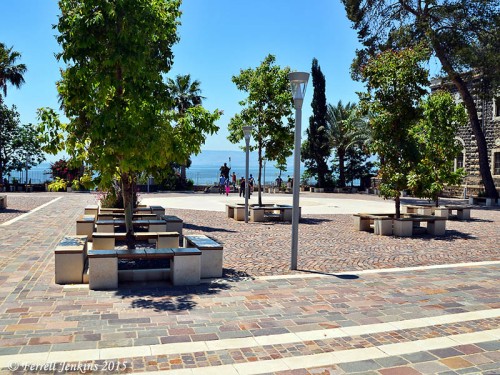 The new plaza at Capernaum. Photo by Ferrell Jenkins.

There were numerous bus loads of tourist visiting the site. I just waited for a larger group to move before making the picture. I did not see many American groups but the hotels were full of Asians, Africans, Hispanics, and some Australians, British, and Canadians.

The architectural fragments uncovered in excavations have been moved to the north of the entrance (and the plaza). Rails have been installed to allow ease of access, and yet to protect the objects. This makes it easy to get nice closeups of certain artifacts. 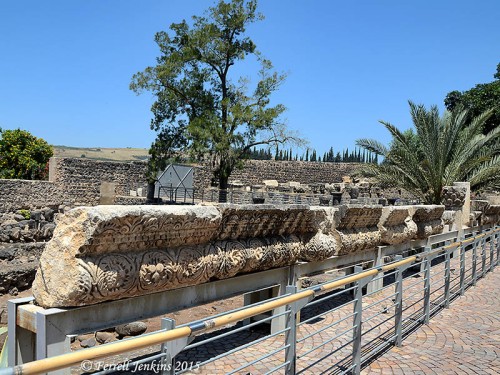 Display of architectural fragments and other artifacts. Photo by Ferrell Jenkins.

Photos of the reconstructed synagogue at Capernaum were recently posted here.

Capernaum was located on the frontier between the territory of Herod Antipas and that of Herod Philip. The city became important in the earthly ministry of Jesus. Notice just a few events that make it so significant.

Capernaum was one of three cities of the area denounced by Jesus  on account of their failure to believe.

Then he began to denounce the cities where most of his mighty works had been done, because they did not repent.  “Woe to you, Chorazin! Woe to you, Bethsaida! For if the mighty works done in you had been done in Tyre and Sidon, they would have repented long ago in sackcloth and ashes. But I tell you, it will be more bearable on the day of judgment for Tyre and Sidon than for you. (Matthew 11:20-22 ESV)

4 responses to “Capernaum has a new look”