Tel ‘Eton is thought to be biblical Eglon

Tel ‘Eton (also Tel Eiton and Tel Aitun) is not the easiest archaeological site to locate. The site is situated on Israel’s border with the Palestinian West Bank. Palestine is on the east side of the mound and a military firing range is on the west side. When Leon Mauldin and I located the place we decided it would be best to stick to the gravel road without straying too far to the left or the right — sort of like Joshua.

“Be very firm, then, to keep and do all that is written in the book of the law of Moses, so that you may not turn aside from it to the right hand or to the left,  so that you will not associate with these nations, these which remain among you, or mention the name of their gods, or make anyone swear by them, or serve them, or bow down to them.  (Joshus 23:6-7 NAU)

Tel ‘Eton currently is equated with biblical Eglon by many scholars. Recent excavations have been conducted under the direction of Prof. Avi Faust of Bar Ilan University.

Here is a photo of the tel from the south and perhaps a little to the east. 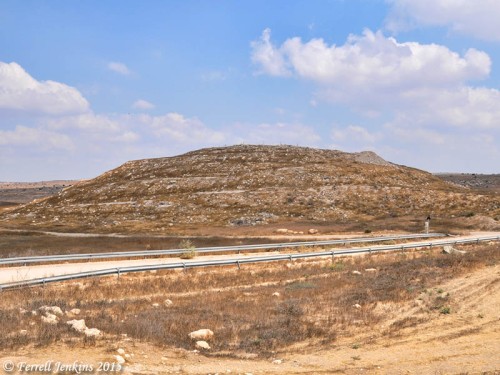 And Joshua and all Israel with him passed on from Lachish to Eglon, and they camped by it and fought against it.  They captured it on that day and struck it with the edge of the sword; and he utterly destroyed that day every person who was in it, according to all that he had done to Lachish.  Then Joshua and all Israel with him went up from Eglon to Hebron, and they fought against it.  (Joshua 10:34-36 NAU)

The distance from Lachish to Eglon (on a straight line) is 7 miles. From Eglon to Hebron is 10½ miles.

An archaeological team has uncovered remains of what may have been an administrative center during the period when Judahite kings ruled out of ancient Jerusalem.

Led by project director Avraham Faust, an archaeologist with Bar-Ilan University near Tel Aviv, Israel, excavations at the site of Tel ‘Eton located on the edge of the fertile Shephelah and the Hebron hill country to its east have revealed structures, artifacts, and fortifications that tell of an ancient city that historically straddled the eastern edge of the lowlands between the biblical kingdom of Judah and Jerusalem in the east and the cities of the Philistines on the Mediterranean coastal plains of the west.

Among the finds was a large, 240 sq.m. 8th century BCE house structure built following a four-room plan typical of ancient Israelite dwellings, featuring high-quality construction and, with its location at the highest point on the mound, commanding a strategic view of all areas below. The ancient building, along with its town context, was strategically located at the cross-roads of important north-south and east-west routes, set above fertile agricultural country.

“The structure was excavated, almost in its entirety, and was composed of a large courtyard with rooms on three sides,” stated Faust. “The building was nicely executed, including ashlar stones in the corners and openings. Hundreds of artifacts were unearthed within the debris, including a wide range of pottery vessels, loom weights, many metal objects, botanical remains, as well as many arrowheads, evidence of the battle which accompanied the conquest of the site by the Assyrians.”

That is the period of Joshua.

Here is a portion of the excavation from 2011. 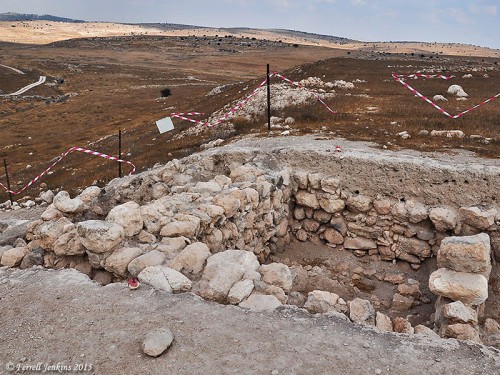 Parrot: It is necessary to see in order to understand

When I began to learn of and appreciate the work of André Parrot, Curator-in-Chief of the French National Museums, Professor at the School of the Louvre, and Director of the Mari Archaeological Expedition, I purchased most of those masterful little books he wrote about Biblical cities. In connection with the recent post about Nineveh I took down my well-marked copy of Nineveh and the Old Testament (1955) and began to read again.

André Parrot writes of his April 1950 arrival at Mosul.

During the twenty years spent in Iraq or in Syria, we had never had an opportunity to cross the ‘Assyrian triangle’ Once again we realized how necessary it is to see in order to understand, and especially to hold in the memory. Knowledge gained from books is certainly not enough, for names which are not attached to any reality are nothing more than ghosts. Ghosts of cities, shadows of men, vague floating shapes, without solidity, though one tries to capture it with the aid of a drawing, a photograph or a vivid description. All students of archaeology know this by experience: nothing can replace actual contact with the object. That is why museums are so important; because there one can recognize the long chain of human history stretching out continuously from its beginning, but in which, instinctively we have a special interest in detecting and observing the first links. But the object is a prisoner in its glass case. Tom from its natural surroundings it has lost its true speech. Nevertheless it exerts a pull, it beckons one to take the road. It is impossible to contemplate the Assyrian reliefs in the Louvre or the British Museum without calling up the image of Nineveh.

Parrot points out that a visit to Nineveh can be disappointing “if one expects to see murals or palaces.” These things, he says, have been destroyed or crumbled away.

No kingdom endures forever, as the prophet Daniel reminded us long ago. Parrot says that he had only four days to visit the Assyrian Triangle (Nineveh, Nimrud, Khorsabad, and Asshur). In the evenings during his visit, he stayed with the Dominican Fathers. He says his memory of Nineveh,

is bound up with that of Mosul and the white cell in the monastery where, every evening of that short stay, we were able to meditate only a few yards from the Assyrian capital, on the vanity of empires and the fate which awaits all of them.

For the same reasons I have spent many years encouraging Bible students to visit the Bible lands.

The British Museum displays many reliefs from Nineveh. Information posted with the relief below says that it dates to about 700-692 BC. It comes from the SW Palace, Rm. 14, panels 13-15. After the capture of Alammu, a town of uncertain location, the prisoners are brough before the Assyrian king. Some carry heads of the dead. The king, Sennacherib, was shown in his chariot, but this part is now lost (WA 124786-7). Click on the photo for a larger image.

This Assyrian relief from Nineveh shows Prisoners from the town of Alammu. British Museum. Photo by Ferrell Jenkins.