Another look at Hippos (Sussita) 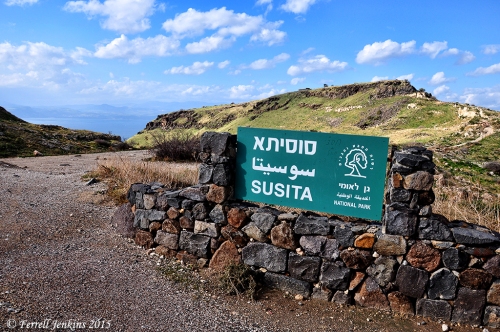 View of Hippos/Sussita (Susita) with the Sea of Galilee. Photo by Ferrell Jenkins.

If you look at the site of Sussita/Hippos from an adjacent mountain, or, better yet, from the air, and follow the adjoining ridge, or saddle, to the east, the site looks like the head of a horse and the saddle, or ridge, looks like the long, outstretched neck of a horse. It is this configuration that gave the site its name for nearly a thousand years. The ancient Greeks, who apparently were the first to settle the site, must have been aware of this resemblance because they named the place Hippos (horse). When the Jews conquered the city, they translated the name to Sussita, “mare” in Aramaic. When the Arabs conquered it, they called it Qal’at el Husn, the “fortress of the horse.”

The summit of the mountain is a plateau of about 37 acres on which lie scattered the ruins of what was once a beautiful town overlooking the lake.

Our story begins—perhaps it will begin much earlier after the site is thoroughly excavated—about a century after Alexander the Great conquered and Hellenized much of the then-known world. After Alexander’s death in 331 B.C., his empire split in two—the Ptolemies in Egypt and the Seleucids in Syria shared this world. Over the centuries Palestine passed from one side to the other, occasionally winning its own independence. The first evidence we now have of organized habitation at Hippos indicates that it was founded by the Seleucids in the middle of the third century B.C., very probably as a frontier fortress against the threat of the Ptolemaic kingdom to the south. The settlement was located on a most strategic point, on the western approach to Gaulanitis (today’s Golan Heights). The site’s natural fortification and defense allowed it to serve equally as a fortress stronghold and as an effective frontier post, controlling any movement to the east, both in time of war and peace. In about 200 B.C., the boundaries of the Seleucid kingdom were pushed down to southern Palestine, so Hippos lost much of its strategic significance but it retained its importance as an urban cultural center, with a social and political organization in accord with the principles of a Greek polis.

When the town was formally recognized as an official constitutional polis, it was renamed Antiocha, in honor of the head of the Seleucid kingdom, Antiochus the Great (III), although the old name Hippos was also officially used.

Hippos had a port on the Sea of Galilee “to serve the commercial and navigational needs” of the city.

The progress of the city as a Hellenistic center was interrupted for a period of about 20 years during the first half of the first century B.C. Sometime between 83 and 80 B.C., the Judean king Alexander Jannaeus, who then ruled an independent fiefdom, conquered Hippos. According to the first-century A.D. historian Flavius Josephus (Antiquities of the Jews 14.75), Jannaeus forced Hippos’ heathen inhabitants to be circumcised and to accept Judaism. In 64 B.C., however, the Roman army entered the scene. The Roman general Pompey took the city from the Jews; it was then included in the League of the Ten Cities, the Decapolis, created by Pompey in the northern Jordan Valley and adjacent Transjordan. Each city in the Decapolis had jurisdiction over an extensive area. As a member of the Decapolis, Hippos enjoyed internal autonomy and could even mint its own coins. The population of Hippos welcomed Pompey with open arms.

About 35 years later, Hippos again became part of a Jewish realm. In 30 B.C. the Roman emperor Augustus gave Hippos to Herod the Great, who ruled it until his death 26 years later, in 4 B.C. After Herod’s death, Hippos was assigned by the Romans to the province of Syria.

During the First Jewish Revolt against Rome (66–70 A.D.), the Jews attacked Hippos and its Greek inhabitants, who retaliated by killing or imprisoning the Jews residing there. (Biblical Archaeology Review 16:05, Sep/Oct 1990).

Riesner says that Hippos “must be” the city of the Decapolis presupposed in Mark 5:1-20 (the account of casting demons into swine; Dictionary of Jesus and the Gospels 40). It might be. Hippos is the closest of the cities of the Decapolis to the area of Jesus’ ministry which was centered in Capernaum. It would make sense that Gentiles in this area might be growing pigs.

And he [the healed demon-possessed man]went away and began to proclaim in the Decapolis how much Jesus had done for him, and everyone marveled. (Mark 5:20 ESV)

And great crowds followed him [Jesus] from Galilee and the Decapolis, and from Jerusalem and Judea, and from beyond the Jordan. (Matthew 4:25 ESV)

Could Hippos Be the City Set on a Hill? Chris McKinney wrote an article for Seeking a Homeland in May, 2010 suggesting consideration of Hippos (Hippus) for the “city set on a hill” mentioned by Jesus in Matthew 5:14b). He uses Google Earth to show the location of various sites around the Sea of Galilee. There is also a nice photo allowing you to see how the site looks like the head of a horse. Read his article here. Certainly plausible.

2 responses to “Another look at Hippos (Sussita)”