We had a good response to our recent posts, here and here, about the Roman Tenth Legion in Jerusalem.  I will post a few photos of other artifacts that are readily available for those who visit Israel.

The first is an inscription of the eighth cohort of the Tenth Legion. According to the accompanying sign in the Israel Museum this limestone inscription comes from Jerusalem or Samaria and belongs to the first or second century A.D. The inscription reads “LEG X FRE COH IIX” and is decorated with dolphins and a wild boar, symbols of the legion. 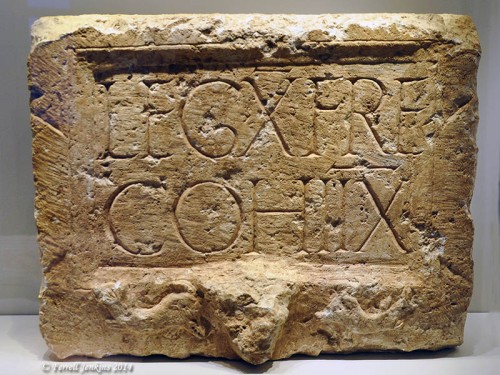 Inscription of the eighth cohort of the Tenth Legion. Photo by Ferrell Jenkins.

About halfway between Jerusalem and Bethlehem is the site of Ramat Rachel. It was first occupied in the 7th century B.C. Stratum III revealed evidence of a Roman villa dating to the 3rd and 4th centuries A.D. Some of the clay tiles from the villa are displayed in the hotel at the site.

Information about Ramat Rachel is available on the Archaeological Project website here.

Tile of the Tenth Legion from Ramat Rachel. Photo by Ferrell Jenkins.

Finally, here is a tile fragment with a stamp of the Tenth Legion. The inscription reads “LG X F.” A wild boar and a battleship are the symbols on this one. The Israel Museum says this tile dates to the 1st-2nd century A.D.

The Roman period in the Holy Land is usually dated from about 63 B.C. to A.D. 323. This includes the entire period of Jesus, the early church, and the New Testament, but it also includes the time of the destruction of Jerusalem and the period when Jerusalem was rebuilt by the Emperor Hadrian and named Aelia Capitolina.

Added Note: See the helpful comments by Tom Powers below. Tom is licensed as a guide in Israel, but is no longer living there. Here is the photo he mentions in the comment about the reused stone in the wall of the Old City near Jaffa Gate.

Partial stone bearing inscription of the Tenth Legion reused in the wall of the Old City near Jaffa Gate. Photo by Tom Powers.

5 responses to “More artifacts of the Tenth Roman Legion”