The Tenth Roman Legion in Jerusalem

Students of the Bible are aware that the city of Jerusalem, including the Herodian temple, was destroyed by the Romans in A.D. 70. Vespasian commanded the Romans in the north of the country. When he learned of the death of Nero he began his return to Rome and left his son Titus in command of the military forces.

When Titus began to position his forces around the city of Jerusalem, he called the tenth legion from Jericho to come up to the Mount of Olives and take their position there.

and as these were now beginning to build, the tenth legion, who came through Jericho, was already come to the place, where a certain party of armed men had formerly lain, to guard that pass into the city, and had been taken before by Vespasian. These legions had orders to encamp at the distance of three quarters of a mile from Jerusalem, at the mount called the Mount of Olives, {c} which lies opposite the city on the east side, and is parted from it by a deep valley, interposed between them, which is named Kidron. (Josephus, Jewish Wars 5:69-70)

Jesus had prophesied about forty years earlier that the Holy City would be surrounded by armies.

But when you see Jerusalem surrounded by armies, then know that its desolation has come near. (Luke 21:20 ESV)

The word used for armies (stratopedon) is used in literature of the time to specify a legion or a camp (see BDAG and MM).

Archaeological discoveries have supplemented the writings of Josephus to provide evidence of the presence of the tenth legion in Jerusalem. In addition to the column near Jaffa Gate that we mentioned in the previous post, we here call attention to some other evidence that is readily available for anyone who wishes to see it. Here, I call attention to a Roman milestone. 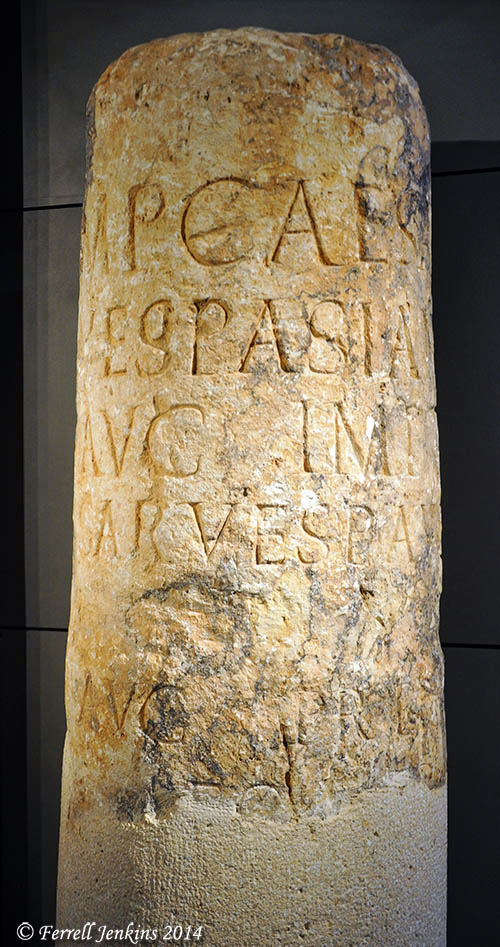 The Israel Museum sign associated with the milestone reads,

Near the Temple Mount in Jerusalem, a milestone bearing a Latin inscription was discovered. The inscription mentions both the Roman emperor Vespasian and his son Titus, commander of the Roman army at the time of the suppression of the Great Revolt and had been deliberately effaced, seems to have mentioned the name of Flavius Silva, procurator of Judea and commander of the Tenth Legion, responsible for both the destruction of Jerusalem and the conquest of Masada. The inscription was carved by soldiers of the Tenth Legion.

I have a few more photos of artifacts mentioning the tenth legion that I hope to post soon.

4 responses to “The Tenth Roman Legion in Jerusalem”