Have new gates been discovered at Lachish?

Luke Chandler has reported the identification of new entrances to the ancient city of Lachish here. The late Iron Age gate where the Lachish Letters were discovered is marked by an oval (almost circle). This is the entry to the site used by tourists who visit.

The newly-identified entrances are in the area of the rectangle marking. This is the area where most (or all) of the current excavations have been conducted. 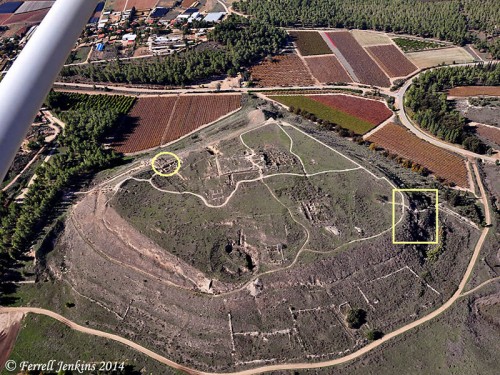 Chandler says that the newly-identified entrances have preliminary dating to the earlier Iron Age [1200-900 BC, the period of the Judges and the United Kingdom] and the Middle Bronze periods [2050-1550 BC, the period of the Patriarchs]. He says this is where Prof. Yosef Garfinkel plans to begin the 2015 season of excavations.

Chris McKinny, a staff member of the Tel Burna Excavation Project, discusses the importance of the discovery if one of the gates does prove to belong to the “early Iron Age.” He says,

If this is in fact a gate that can be dated to the “early Iron Age,” then this is a very important discovery for reconstructing Israel/Judah’s geopolitical character in the 10th and 9th centuries BCE.

2 responses to “Have new gates been discovered at Lachish?”