Isaiah’s readers should find consolation in the fact that the city that was to be devastated by the Babylonians would eventually be rebuilt.

In that day this song will be sung in the land of Judah: “We have a strong city; he sets up salvation as walls and bulwarks. Open the gates, that the righteous nation that keeps faith may enter in. (Isaiah 26:1-2 ESV)

The photo below shows the foundation of a large wall thought to be the “Broad Wall” of Nehemiah 3:8 (see 12:38). The wall, excavated after 1967, was originally about 25 feet high.

Next to them Uzziel the son of Harhaiah, goldsmiths, repaired. Next to him Hananiah, one of the perfumers, repaired, and they restored Jerusalem as far as the Broad Wall. (Neh 3:8 ESV)

The “Broad Wall” in Jerusalem. Photo by Ferrell Jenkins.

Prof. Eilat Mazar believes she has discovered a wall dating to the time of Nehemiah (Persian Period) in the City of David excavations. If so, this would mean we have portions of the wall on the west and on the east side of the ancient city. 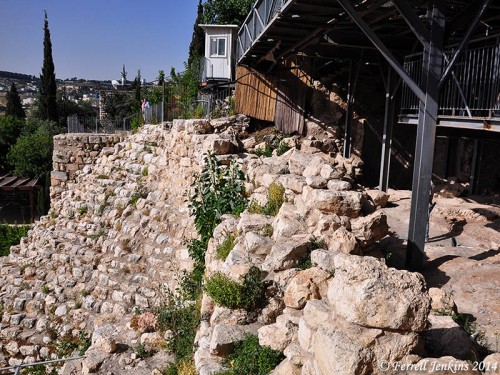 Possible portion of wall (right) from time of Nehemiah in the City of David. Photo by Ferrell Jenkins.