Several times we have commented on the wonderful photos supplied by Prof. Aren Maeir about the archaeological excavations at Tell es-Safi/Gath, both during the season and throughout the year.

For the past two days Maeir has posted photos of the Elah River flooding at Safi/Gath. English readers will relate to the word brook. The Hebrew is nahal. This is the same brook we read about in the account of David choosing five smooth stones when he went to fight Goliath (1 Samuel 17:40). The term used here is equivalent to the Arabic wadi.

A stream like this is dry most of the year, but flows freely during the rainy, winter season.

The photo below is from the Tell es-Safi/Gath blog here. It was made by Uri Yehuda, a student in Prof. Maeir’s department at Bar Ilan University. Those who have visited Gath during the dry season should find it instructive. 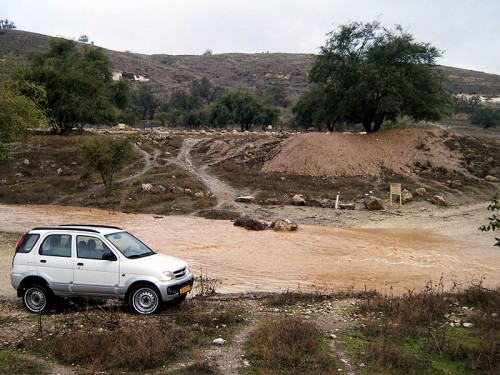 Flooding of the Elah River next to Safi. Photo by Uri Yehuda.

You may locate this photo in hi-resolution, and another made by Aren on the blog. The best picture may be in video format with a young lady telling us it is the “flood of December.” The link to all of this material is here.

The Brook of Elah begins below Adulam, flows through the valley bearing its name, around Azekah, past Gath, and into the Mediterranean Sea.

In the aerial photo below you will see Tell es-Safi/Gath just to the left of the center of the photo. The Elah River (Brook) can be seen in the lower right corner of the photo. This photo was made December 15, 2009. The river bed is green because there had been earlier rains, but nothing like the recent storm seen in Israel. 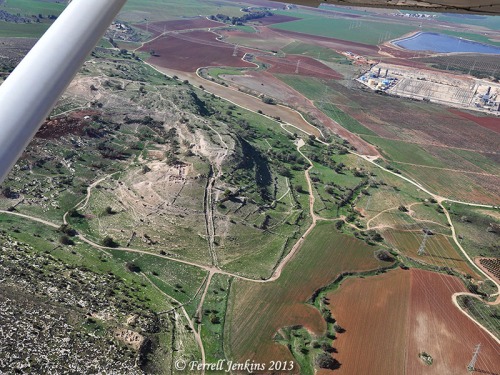 Aerial view of Gath and the Elah Brook. Photo by Ferrell Jenkins.