The Moabite city of Elealeh

Elealeh (pronounced EL e A lah) is one of those little known cities from Bible times. It is now identified as Tell (or Tall) Al-Elealeh. The mound is located about two miles northeast of Heshbon.

When we first encounter the city of Elealeh it belongs to the Moabites. After the Israelites occupied the area the city was given to the tribe of Reuben as part of their territory (Numbers 32:3, 37). 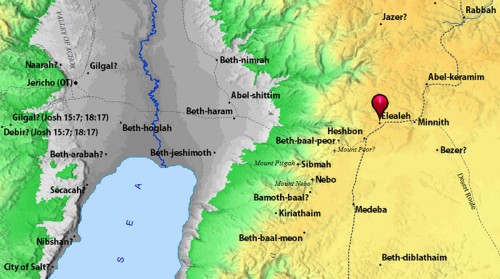 The Seventh-day Adventist Bible Dictionary gives this brief information about the city.

A town which the Israelites took from the Amorite king of Heshbon, and which the Reubenites rebuilt (Num 32:3, 37). Later, when the Moabites extended their territory to the north, they reoccupied it (Is 15:4; 16:9; Jer 48:34). It is now el–‘Al, a ruin on top of a hill, 3,082 ft. (940 m.) above sea level, about 2 mi. (c. 3 km.) northeast of Heshbon (Palestine Under Joshua and the Judges). Archeological soundings were conducted at el–‘Al by W. L. Reed in 1962. The excavated evidence indicated that the ancient city had existed from the 3d millennium B.C. down to the Middle Ages with a possible gap in occupation from 1600–1200 B.C. since no Late Bronze Age remains were found. (Horn, Siegfried H. The Seventh-day Adventist Bible Dictionary 1979 : 318.)

The site of ancient Elealeh. Photo by Ferrell Jenkins.

2 responses to “The Moabite city of Elealeh”