North of the Sea of Galilee

Most of our visits today were north of the Sea of Galilee. Here are some of the stop we made.

The fishing port of Tiberias, where we saw fishermen bringing in some large fish. One of the owners of the Ron Beach Hotel told us these large fish were used for fish oil.

Senir (Hasbani) River. One of the sources of the Jordan.

Beit Ussishkin Museum at Dan. The museum is mostly about the flora and fauna of the region, but there are a few pieces from the Dan excavations.

Omrit. Site of possible Herodian temple to Augustus. The road is horrible, and there is still a long walk to visit the site. It is really not prepared or intended for the casual visitor. Someday it should be.

Abel-beth-maacah (or Abel of Beth-maacah). A city called “a mother in Israel” (2 Samuel 20:19). We had a view of Mount Hermon with a small amount of snow still on the top. 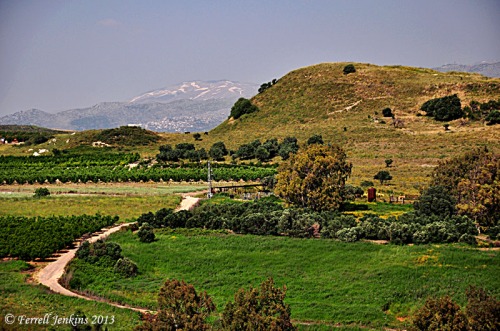 Metula. This Israeli town is on the border with Lebanon. We looked over into Lebanon.

Hula Lake/Agamon Lake. This is the restoration of a portion of Hula Lake that had been drained in the mid-20th century. Birds from Asia and Europe travel through the Great Rift and their way to Africa and back. This lake is a favorite stopping place for many of them.

It was a hot day, but an enjoyable one.

4 responses to “North of the Sea of Galilee”