A funny thing happened on the way to Samsun

Pardon the delay, but I have had a couple of grandson days since the last post. Not much else gets done.

In the last post I spoke of the mountainous road east of Sinop, and of the rare opportunity to pull off the two lane highway. The first time we found a place to safely pull off the road we stopped to make some photos. I walked a few yards away from the car to find a clearing for a photo.

After a minute or two we heard a roaring sound. My first thought was that there might be a military air base in the vicinity. The sound came from jets taking off, I thought. To my surprise I saw a group of motorcyclists coming around the bend. One of the riders in the front of the group had a helmet with horns. Further back was another rider with the same kind of helmet. I didn’t know if these guys were a rogue motorcycle club or a bunch of “Wild Hogs.”

When the entire group of about 15 cyclists pulled in around our car which was up the hill a short distance from where I was, I thought of the old joke about the tourist group that got lost in cannibal territory. The cannibal leader told the group, “You take the bus and leave the driver for us.” I was able to snap a photo of Leon making a fast get away from the group. But the car is totally hidden from view by the cyclists. 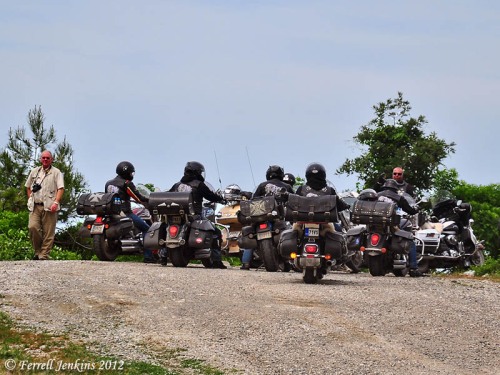 Cyclists on the mountainous road east of Sinop. Photo by Ferrell Jenkins.

After conferring, Leon and I decided we should get to the car while there was opportunity. As we approached the cycles I noticed that most of the tags, and some of the leather jackets, bore the designation Estonia. When we spoke in English, several of the riders tried to communicate. The best English speaker in the group was from Russia. He told us that they were riding around the Black Sea.

An Estonian proudly showed me his shirt with a screen print showing the Black Sea and the names of the major places they were visiting. I think his smile tells how our encounter turned out. The Black Sea is slightly visible far below us.

Cyclist from Estonia making a circuit of the Black Sea. Photo by Ferrell Jenkins.

Uneasiness past, we said good-bye and went on our way to Samsun. It was a nice experience; the sort that we often encounter in foreign travel.