Pontus is mentioned only three times in the New Testament.

Peter, an apostle of Jesus Christ, To those who reside as aliens, scattered throughout Pontus, Galatia, Cappadocia, Asia, and Bithynia, who are chosen (1 Peter 1:1 NAU)

Scholars suggest that the order of the Roman provinces is indicative of the order in which Peter’s epistle was delivered by the messenger. Colin Hemer argues for Amasus (Amisos) as the starting point on the Black Sea coast for the messenger. Amisos is now identified with the Turkish city of Samsun, a prosperous town of over half a million inhabitants (“The Address of 1 Peter.” Expository Times, 89:239-243). Mark Wilson agrees (Bibical Turkey, 338).

The photo below was made from the harbor of Samsun. The hill in the distance marks the ancient acropolis of Amisos. 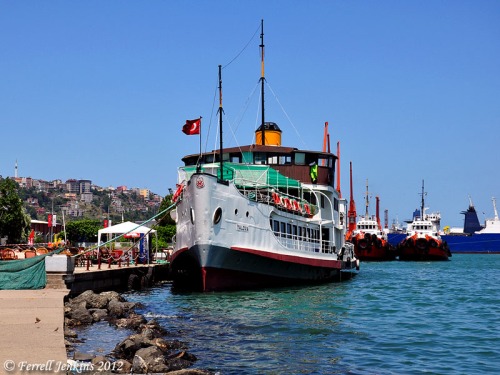 Harbor at Samsun with acropolis of ancient Amiisos, Photo by Ferrell Jenkins.

Even the Romans brought their armies to this region of Asia Minor through the ancient port city of Amisos. This was much easier than traveling overland.

Amisos is mentioned under the same Sampsames in the Apocrypha book of 1 Maccabees 15:23 (RSV).

Tomorrow we hope to visit the Pontic city of Sinop (Sinope), about 100 miles west of Amisos.