Haaretz announces that the “Israeli government allocates NIS 5 million to preserve Tel Shiloh in West Bank.” According to the article, a large tourist center is planned at the site.

This is a precedent-setting decision, since Israeli governments up to now have not allocated funds for renovation and preservation of the site, located within the area of the Binyamin Regional Council. The committee’s decision to embark on the project states that “Tel Shiloh is a unique heritage asset” for the Jewish people, and mention was made of the fact that work at the site will be backed by supplementary funds totaling some NIS 10 million, to be provided by private sources.

The full article may be read here. For our US readers, 5 million NIS [New Israeli Shekels] equals approximately $1,338,000.

Some archaeological work was already underway last September when Leon Mauldin and I visited Tel Shiloh. The new excavation at the base of the mound dates to the Byzantine and Islamic period. 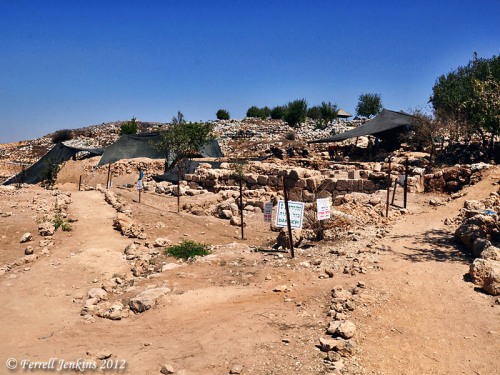 Tel Shiloh. New excavations at the base of the mound. Photo by Ferrell Jenkins.

However, there is an annual festival to the LORD in Shiloh, which is north of Bethel (east of the main road that goes up from Bethel to Shechem) and south of Lebonah.” (Judges 21:19 NET)

More info about Shiloh, with earlier photos, may be seen here.

One response to “Israel government plans to preserve Tel Shiloh”