Absalom’s Pillar and the Tomb of Zacharias, father of John

Yesterday we wrote about the mistaken identification of a first century B.C. tomb in the Kidron Valley as the monument Absalom built for himself (2 Samuel 18:18).

About 12 years ago an art history student at Hebrew University turned in a paper to Joe Zias which included an old photo of an inscription on the south side of the Pillar of Absalom. The inscription is difficult to see because the monument is cut from the natural rock. After many late afternoon visits to the site in 2002, waiting for the sun to be in the right spot to highlight the inscription, Zias finally saw it. Afterwards, efforts were made to photograph it. 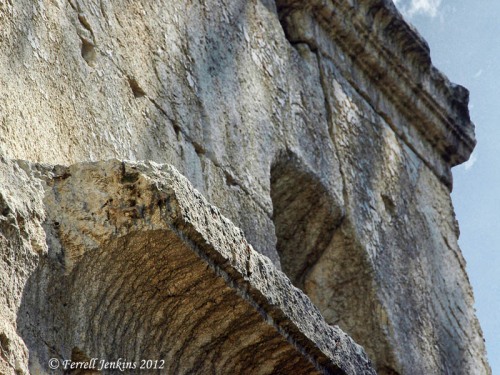 South side of the Pillar of Absalom. Photo by Ferrell Jenkins. 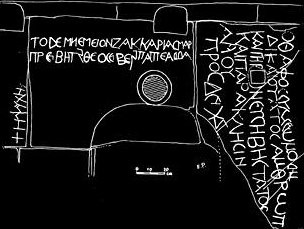 Due to a number of circumstances it was thought best to make a cast of the inscription so it could be studied in the lab. Numerous scholars from various fields of study were called in to assist and give advice. This photo shows Joe Zias, a physical anthropologist, with the cast.

Joe Zias with cast of Zacharias inscription from Absalom Monument.

The inscription is written in Byzantine Greek of the fourth century A.D. Zias teamed up with Fr. Émile Puech, a professor at the École Biblique in Jerusalem, to read the inscriptions. The horizontal inscription reads,

This is the tomb of Zacharias, martyr, very pious priest, father of John.

Luke records the naming of John by Zacharias this way:

And it happened that on the eighth day they came to circumcise the child, and they were going to call him Zacharias, after his father. 60 But his mother answered and said, “No indeed; but he shall be called John.” 61 And they said to her, “There is no one among your relatives who is called by that name.” 62 And they made signs to his father, as to what he wanted him called.  63 And he asked for a tablet and wrote as follows, “His name is John.” And they were all astonished.  64 And at once his mouth was opened and his tongue loosed, and he began to speak in praise of God.  (Luke 1:59-64 NAU)

I had the opportunity to hear Joe Zias and Émile Puech make their presentation about this discovery at the annual meeting of the Society of Biblical Literature in 2003. The discovery was published in Revue Biblique, July 2003.

Could this be the priest Zacharias (also spelled Zechariah in some English versions) the father of John the Baptist? We may think that it does, but it might be best to agree with Jerome Murphy-O’Connor who says that this inscription only reflects a tradition from the 4th century A.D.

Such Byzantine identifications reflect the piety of the period and have no historical value.

Another scholarly article appeared in Near Eastern Archaeology, Dec. 2005. It includes photos showing how these scholars were able to make the cast. One of the best popular articles I saved was published in The Christian Science Monitor. I see that it is no longer available online. If you have additional interest you might take a look at the Associated Press article here.

The vertical inscription may be even more significant. Perhaps I can get to that in a future post.

Like Loading...
This entry was posted in Bible Study, Israel, New Testament, Photography, Travel and tagged John the Baptist, Zacharias. Bookmark the permalink.

One response to “Absalom’s Pillar and the Tomb of Zacharias, father of John”