The distaff and the spindle

Most of the clothing in use during Bible times was made from flax or wool. The “worthy woman” or “capable wife” of Proverbs 31:13 “looks for wool and flax And works with her hands in delight.” The raw product must be spun in preparation for weaving.

She stretches out her hands to the distaff, And her hands grasp the spindle. (Proverbs 31:19 NAU)

King and Stager describe the process of spinning:

Spinning is done by means of the distaff and spindle. The distaff (a large stick) holds on its cleft end the unspun flax or wool from which the thread is drawn. The hand-held spindle, which is used to this day, is the rotating rod or shaft on which the fibers are twisted to form thread and are then wound. The spindle may be weighted by pierced, circular objects known as spindle whorls, which have been recovered in large quantity at practically every excavation of Palestine. (Life in Biblical Israel, 152) 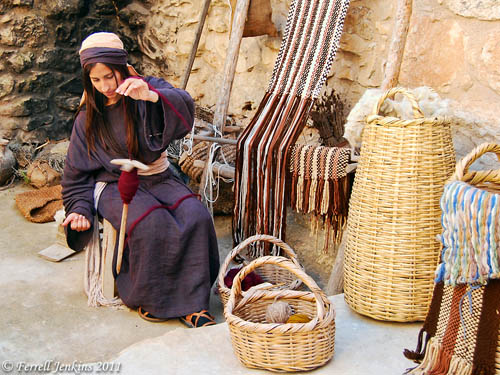 Spinning dyed wool in preparation for weaving on the loom. Photo by Ferrell Jenkins.

Have you ever heard someone speak of the distaff or the “distaff side” in reference to a woman or women? Maybe not, unless you were born in the first half of the last century. I checked the Webster’s Revised Unabridged Dictionary of 1913 for the use of the word distaff. At that time the first definition was “the staff for holding a bunch of flax, tow, or wool, from which the thread is drawn in spinning by hand.” The dictionary also points out that the term was “used as a symbol of the holder of a distaff; hence, a woman; women, collectively.”

Moving back to 1828, Webster states that the term distaff was also used “figuratively, a woman, or the female sex.”

Some more recent dictionaries give the figurative meaning but some of these say the use is archaic.

Women who were skilled in this work prepared materials for the tabernacle during the wilderness wandering.

All the skilled women spun with their hands, and brought what they had spun, in blue and purple and scarlet material and in fine linen. All the women whose heart stirred with a skill spun the goats’ hair. (Exodus 35:25-26 NAU)

Here is a basket of wool waiting to be spun. 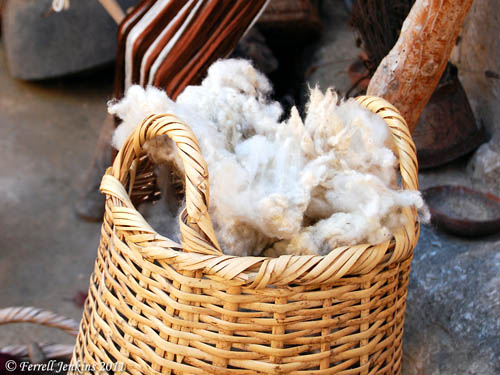 Basket of wool ready to be spun. Nazareth Village. Photo by Ferrell Jenkins.

Perhaps latter we will say a few things about weaving.