Hazor was one was the most important Canaanite cities when the Israelites entered the land.

And Joshua turned back at that time and captured Hazor and struck its king with the sword, for Hazor formerly was the head of all those kingdoms. (Joshua 11:10 ESV)

Stone stelae are commonly found during the excavation of Biblical cities. Archaeologists and Biblical scholars refer to an area of this type as a cultic center or complex. The word cult is used in several ways in modern writing and conversation, but it has a specialized meaning when we think of the archaeological context. The Hypertext Bible Commentary – Amos defines cultic as it is used in this context.

To do with organized religion and public worship, so “Israel’s cult” refers to the organized public religion of the kingdom of Israel. The word, when used in biblical studies, implies nothing (either way) about how theologically correct such worship or practice might be. It simply means public religion rather than private.

The photo below shows a cultic center found at Hazor from the Middle Bronze Age II (c. 1800-1550 B.C.). Sharon Zucherman, co-director of the Hazor excavations, refers to an area like this as “a ceremonial religious precinct” and “a cultic and ceremonial precinct” (BAR March/April 2006). An area like this is sometimes called a high place (Hebrew bamah).

The Israelites were instructed by the Lord to destroy these religious centers.

You will not bow down to their gods or worship them or observe their rites, but throw them down and smash their cultic stones. (Exodus 23:24 NJB)

In the left foreground of the area below there is a round basin. Perhaps for a libation? 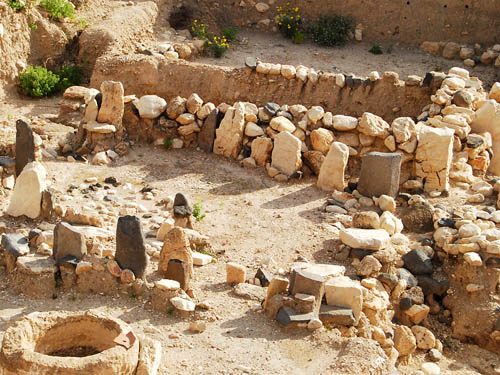