The earth seems to be shaking a lot in recent months. This morning we have reports of an earthquake which measured 6.0 on the Richter scale hit the mainly Kurdish region of eastern Turkey.

A powerful earthquake in eastern Turkey on Monday buried villagers as they slept in mud-brick houses, killing at least 57 and injuring dozens more, officials said.

The quake, which measured 6.0 on the Richter scale, struck at 4:32 am (0232 GMT) at a depth of five kilometres, with an epicentre near the Karakocan town in Elazig province, the Istanbul-based Kandilli observatory said.

Rescuers struggled to dig survivors from the rubble after the quake tore down mud-brick houses in several mountainous villages in the mainly Kurdish area, killing whole families in their sleep.

The report may be read in its entirety here.

In January I wrote about some preparations for earthquakes that I saw in eastern Turkey here. 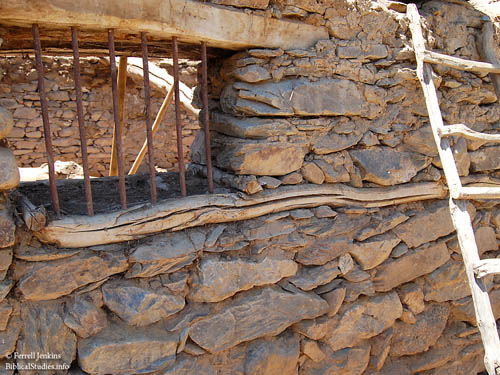 Preparing for an earthquake in Eastern Turkey. Photo by Ferrell Jenkins.

Earthquakes were so common in the Bible World that they are often used to provide imagery for the direct action of God. John uses this symbolism to describe what happened when the Lamb (Christ) broke the sixth seal (Revelation 6:12-17). A few words from the Dictionary of Biblical Imagery will give us something to think about today.

Some references to earthquakes appear to be bald statements of historic fact and seem to have little, if any, symbolic value (﻿Amos 1:1﻿, cf. ﻿Zech 14:5﻿; ﻿Acts 16:26﻿). Most references, however, particularly in the poetic parts of the Bible, accord a high degree of symbolism to earthquakes. Earthquakes in Scripture are often seen as manifestations of the direct action of God’s power. The example that is probably alluded to most is the earthquake at the giving of the law at ﻿Sinai﻿ (﻿Ex 19:18﻿). In their poetic reviews of the ﻿Exodus﻿, later writers seem to have emphasized this element (﻿Ps 68:8﻿; ﻿77:18﻿; ﻿114:4–7﻿) and broadened its scope to cover the whole exodus event. Matthew’s linkage of the earthquake at Jesus’ crucifixion with the rending of the temple ﻿veil﻿ (﻿Mt 27:54﻿) is thus far more than a statement of physical cause and effect: it is profoundly symbolic. (225)