The temple of Baal-Berith at Shechem

The book of Judges describes the situation at Shechem after the death of Gideon.

After Gideon died, the Israelites again prostituted themselves to the Baals. They made Baal-Berith their god. (Judges 8:33 NET)

A large fortress (or Migdal) temple discovered on the acropolis of Shechem has been identified as the temple of Judges 9. It was  constructed in the seventeenth century B.C. and lasted until the destruction of the city by Abimelech in the twelfth century B.C. The largest temple yet found in Canaan, it measures 21.2 x 26.3 m, and has foundations 5.1 m thick that supported a multistoried superstructure of mud bricks and timber. On the east, two towers containing stairwells to the upper stories flanked the entrance. Inside, two rows of columns, three in each row, divided the space into a nave and two side aisles (cf. vv. 46-49)” (Bryant Wood. “From Ramesses to Shiloh.” Giving the Sense. Kregel, 2003).

The photo shows the foundation of the Temple of Baal-Berith at Shechem. This structure was brought to light in the 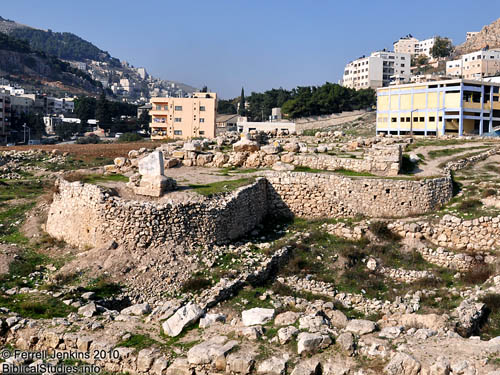 G. Ernest Wright says, “Before 1903 biblical geographers all thought that Shechem was once located where the modern city of Nablus is.” They associated the Roman city of Neapolis with Nablus. The German scholar Herman Thiersch found the walls of “old Shechem” June 26, 1903. He said, “The place is somewhat under cultivation with vegetables and seed-crops.” (G. Ernest Wright, Biblical Archaeologist: Vol. 20 1-4, electronic ed. (Philadelphia: American Schools of Oriental Research, 2001, c1957). This site is identified with the mound of Tell Balata.

The first excavations at Shechem were conducted by Prof. Ernst Sellin in 1913 and 1914. More extensive excavations took place between 1926-1928.

2 responses to “The temple of Baal-Berith at Shechem”