The Dead Sea a century ago

In the early twentieth century the Palestine Exploration Fund measured the water level of the Dead Sea near Ein Fash’ha. Their mark is still visible. It would be nice to look down to the current level and make a photo of the road and the sea below. At this point, however, the roadway is narrow and stopping is difficult. A high fence and growth on the sea side make photos nearly impossible. I have been able to get a photo of the sign and the marks left by the PEF.

PEF sign at the Dead Sea. Photo by Ferrell Jenkins.

P.E.F. ROCK (OBSERVATION ROCK)
Between the years 1900-1913, and again in 1917, the Palestine Exploration Fund (P.E.F) measured the water level of the Dead Sea using this rock. The red paint marking the water level as it was a century ago can still be seen today.

The photo below shows the P.E.F. initials and two black marks. In the event that you find the P.E.F. difficult to see, I have added P.E.F. to the right of the chiseled mark on the rock. 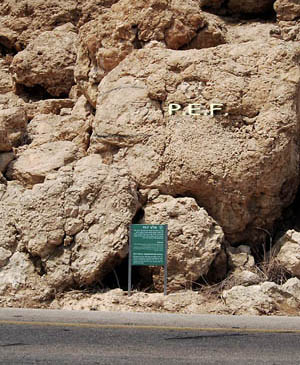 The New 7 Wonders has included the Dead Sea on their list of New 7 Wonders of Nature. You may see the entire list and cast a vote here. (HT: Harriett)