The Wilderness of Judea

What did you go out into the wilderness to see? A reed shaken by the wind? (Luke 7:24 ESV)

The wilderness (Greek eremos) of Judea is described this way in Bauer (BDAG):

Of the Judean wilderness, the stony, barren eastern declivity of the Judean mountains toward the Dead Sea and lower Jordan Valley.

The Hebrew word for this wilderness is midbar. Charles F. Pfeiffer said the wilderness of Judea,

is the region of rugged gorges and bad lands in the eastern part of Judah where the land slopes off toward the Jordan Valley. In ancient times this area was infested with wild animals. Except for a brief time during the spring rains the wilderness is arid. (Baker’s Bible Atlas, 201)

Many people who read the Bible in English, without checking into the matter, think of the wilderness as being a place filled with wild growth and underbrush. Jesus’ question to the crowds indicates that no reeds are to be found in the wilderness. In this case a picture really is worth a thousand words. This shows one of the many changing views one might see in the wilderness. This one was made in the month of November and shows a view west toward Jerusalem. 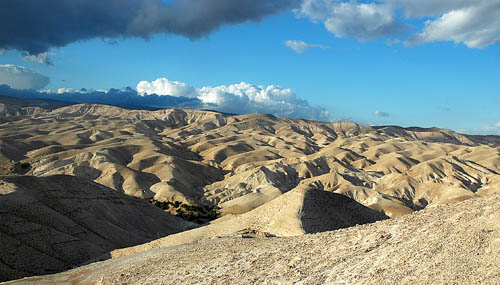 The wilderness of Judea. Looking west toward Jerusalem. Photo by Ferrell Jenkins.

The wilderness of Judea stretches west from the Jordan Valley up to the Mount of Olives. Of course, it extends much farther south along the Dead Sea.