Ha’aretz announces the opening of the Bronze Age gate at Dan after restoration.

The Nature and National Parks Protection Authority yesterday opened “Abraham’s Gate” at Tel Dan in the north, for visits by the public.

The ancient structure from the Canaanite period of the Bronze Age is made of mud and is thought to have been built around 1750 B.C.E. The authority named the archaeological site for Abraham, the first patriarch of the Jewish people, indicating that it dates from the period of Abraham.

The gate was uncovered in 1979 but more recently underwent restoration. It is composed of three arches and constructed of sun-dried mud brick on a foundation of large basalt stones. The gate, which in ancient times stood seven meters tall, has been restored to its original height. It features two towers and a horizontal structure linking them below the arches, the oldest arches ever found in the Land of Israel.

This photo shows the condition of the gate August 31, 2008. I don’t know what has been done to “open” the gate to the public. 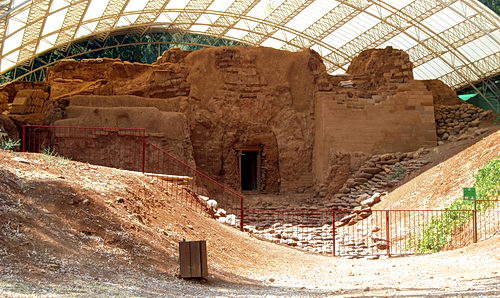 This gate was dubbed “Abraham’s Gate” in the Ha’aretz headline. We have no way of knowing that Abraham saw this gate, but he might have. The Bible records that when the kings of the east took Lot captive, Abraham pursued them as far as Dan (Genesis 14:14).