Passing Through the Cilician Gate

After worship we visited the village of Ortahisar, and made another photo stop in Cappadocia. We stopped in Avanos to make a photo of the Halys River. The river marked the boundary of the early Hittite kingdom. Avanos is noted for its pottery making. In Turkey, as in many parts of the world, the old hand skills such as pottery making are being taken over by machinery. In this small town many of the people still make pottery by hand.
Elizabeth and I are joined by our driver and our guide, Orhan Ongu, for this photo at Ortahisar in Cappadocia. This is Orhan’s home town, but he now lives in Istanbul. He is a knowledgeable and personable guide. The group is enjoying his help and information. 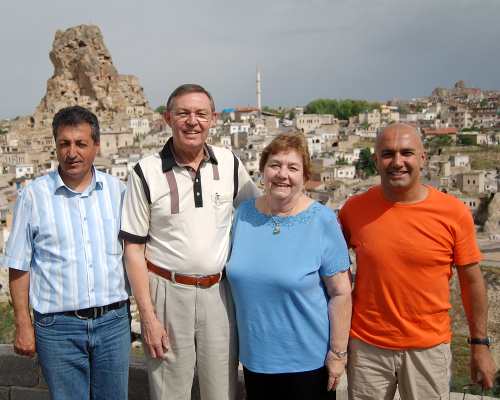 In the afternoon we drove south to Adana through the famous Cilician Gate, the pass through the Taurus Mountains. This pass was used by famous rulers such as Xerxes, Darius, Cyrus, and Alexander the Great. This route seems to be the one taken by Paul and Silas on the second journey (Acts 15:46 – 15:1). It would have been the route used by the Romans and the Crusaders. There is a feeling of participating in history as one travels this road. The ancient road has been replaced by a modern multi-lane highway. The photo below shows the Taurus Mountains from a rest stop north of the Cilician Gates. On the left is a Roman milestone dating to A.D. 231. 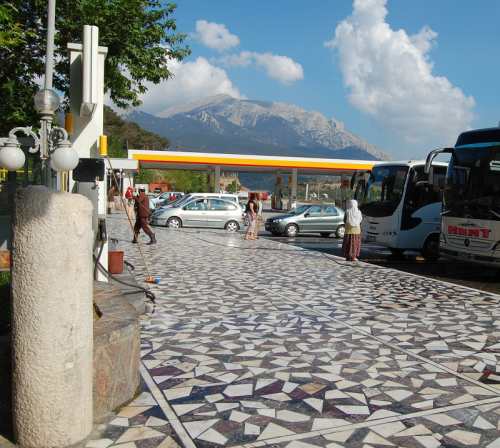 We passed near Tarsus, the native home of Paul, and turned east to Adana. This was the Old Testament region of Que (Kue) and the New Testament region of Cilicia. The earliest letter of the New Testament is the one contained in Acts 15:23-29. This letter is addressed “to the brethren in Antioch and Syria and Cilicia who are from the Gentiles.” Paul and Silas traveled through the region, strengthening the churches (Acts 15:40-41). Who established these churches?

Tomorrow we will explore Tarsus, home of the Apostle Paul.

Yes, I know, the photo is too small for you to pick out your friends. Here is a link to a larger copy you may view. Click on the thumbnail image.