The Altar of Zeus in the Pergamum Museum

The Pergamum Museum in Berlin gets its name from the reconstructed altar of Zeus from Pergamum (Bergama) in western Turkey. I noted earlier that this fabulous reconstruction is now closed for refurbishing. When we visited the Museum in mid-August, 2014, some scaffolding was already in place. 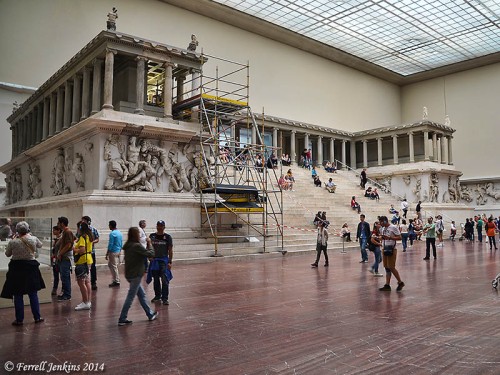 The altar of Zeus was built by Eumenes II (197–159 B.C.) to commemorate the victory of Attalus I over the invading Gauls. This is the most important and largest building from the Hellenistic age. The unique discovery of the Altar is told by Dr. Henry Koch:

“A German engineer named Carl Humann had been authorized to build a road from Pergamon to the Aegean Sea. While he was supervising the work he noticed that marble statues and torsos were being carted from the ruins of the city and brought to the limekiln to be burnt into lime. It is to be feared that many a valuable statue was thus reduced to limestone. One day Humann also observed, how a peasant was hauling a marble slab adorned with statues and figures to the limekiln. He halted the peasant, asked him, how much he wanted for the slab, paid the price and immediately had the slab sent to the curators of the Berlin Museum in Germany. He offered the peasant more money, if he could procure additional slabs for him. The peasant gladly consented. For him it was lucrative business; for the curators it was a precious find.

Alexander Conze, a curator in Berlin, discerned the great value of the find. He recalled having read that a Roman writer named Ampelius living in the second century after Christ had written a Book of Wonders (Liber Memorialis). Among the wonders he also had mentioned the Altar of Zeus in Pergamum. This was a valuable clue for Conze. Humann was at once requested to obtain as many slabs a possible. Permission was also requested of the Turkish Government to have the slabs sent to Berlin and that excavations could be started at once. Permission was granted and the excavations were carried out from 1879-1885. Fortunately most of the ruins of the Temple had not as yet been found or touched. The curators in Berlin could piece them all together and thus the priceless Altar of Zeus could be assembled” (Koch, The Christian News, Nov. 22, 1976).

The Altar of Zeus was re-assembled in more than twenty years of museum work and is now housed in the special Pergamum Museum in Berlin. A trip to see this fabulous piece of architecture is recommended. The marble frieze depicts the mythological battle between gods and giants. The photo below shows a small portion of a scene.

A portion of the Zeus Altar marble frieze. Photo by Ferrell Jenkins.

Only the foundations of the altar can be seen at Pergamum. The Turkish government has requested the return of the Zeus Altar and has been putting pressure on Germany. See one report here.

Site of the Zeus Altar at Pergamum. Photo by Ferrell Jenkins.

In the Lord’s letter to the church at Pergamum, He says,

I know where you dwell, where Satan’s throne is. Yet you hold fast my name, and you did not deny my faith even in the days of Antipas my faithful witness, who was killed among you, where Satan dwells. (Revelation 2:13 ESV)

Some scholars think the reference to Satan’s throne in this text is a reference to the Zeus altar at Pergamum, but there are other suggestions. Kistemaker summarizes some popular views suggested by Colin Hemer:

Or, it might be a combination of these elements.

You will probably need to wait two or more years before you can see the Zeus Altar in the Pergamum Museum.