Happy Birthday to the WWW

The World Wide Web is now 20 years old. There are still a lot of people who are at least 20 years behind. Read the full account and links to related topics here.

In March 1989, Sir Tim Berners-Lee, then a scientist at CERN, the European Organisation for Nuclear Research, published a paper, entitled Information Management: A Proposal, which aimed to provide a framework for academic institutions to organise and share electronic documents across the internet, and were crucial in the creation of the world wide web.

“Tim pulled together ideas of a markup language, getting files on the internet and hypertext,” said Wendy Hall, a professor in the computer science department at the University of Southampton. “The things that made it work were open standards and protocols so anyone could set up their own web server and HTML documents, the fact that it was completely distributed and scalable, and that it worked over the network.”

Sir Tim will mark the occasion with a speech to scientists and technologists in Geneva, exploring the history of the web, and future applications of internet technology.

Earlier this week, Sir Tim warned a parliamentary round-table that allowing advertisers to target internet users by tracking their browsing habits was akin to putting a “spy camera” in people’s homes.

When I first began to use the WWW I would go to the CERN site, long before Google, to search for links to information. I remember telling my students in the 1990s that if they started reading all the pages on the WWW they would never finish. How much more today! Of course, most of the pages are probably not worth reading.

On our recent trip to Alexandria, Egypt, we visited the famous new library. One of the guides showed us the computers that store about 85  —  web pages archived since 1998. Try it here. You can see what Bible World looked like in 1999. 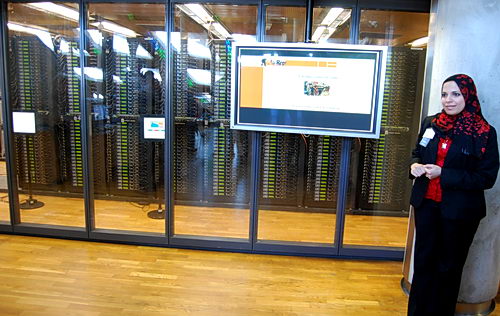 Wayback computers in the library at Alexandria, Egypt. Photo by Ferrell Jenkins.