The Fall of Nineveh (again)

The ancient site of Nineveh is located about 300 miles north of Baghdad. The mound is one mile east of modern Mosul near the bank of the Tigris River.

Nineveh fell in 612 B.C., and the Assyrian Empire came to an end at the battle of Carchemish in 605 B.C.

The LORD called it “that great city” (Jonah 1:2), but little remains of the grandeur and the beauty of ancient Nineveh. My only opportunity to visit Nineveh was on May 14, 1970. I would like to have better photos, but I wanted to share a few slides that I made of the gates.

The first photo shows some reconstruction around the Addad Gate. Ancient ruins can be seen at the entry. This is the gate we have seen continuously on various news programs since the first week we learned of the Islamic State (also ISIS and ISIL) in the area. (I have replaced the colorless sky with blue. Or, is it gold?) 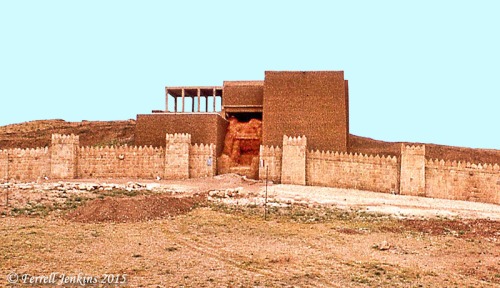 The next gate is known as the Nergal Gate. In 1970 there was one complete winged bull and one partially destroyed bull within the reconstructed gate. 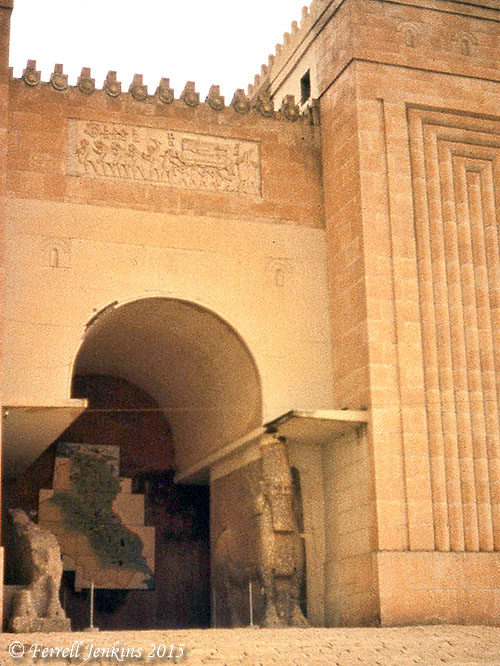 The only other gate I was able to photograph is the Shamash Gate. 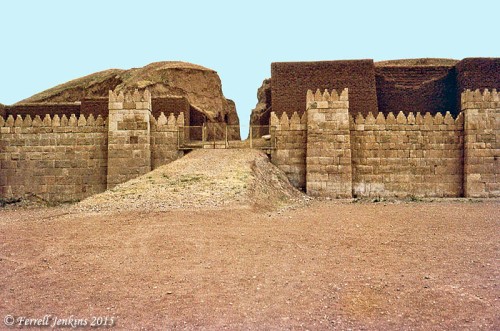 Reconstructed Shamash Gate at Nineveh in 1970. Photo by Ferrell Jenkins.

The traditional tomb of Jonah is at Nebi Yunus. 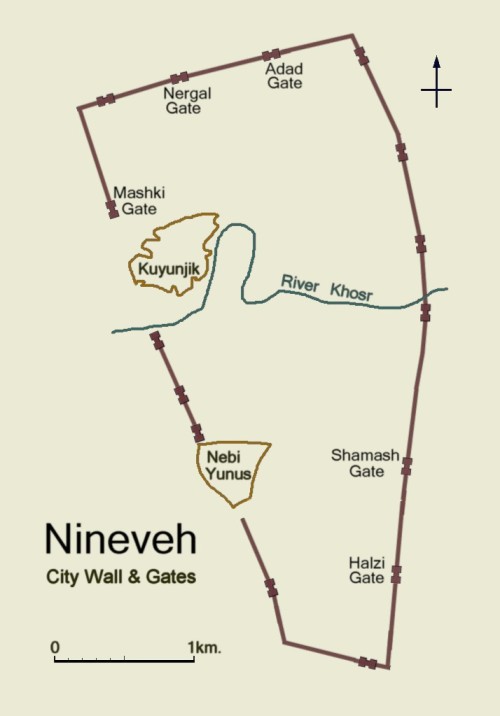 Jonah the prophet was sent to preach in Nineveh. See the book of Jonah and the comment Jesus made on this in Matthew 12:38-41. You will notice Nebi Yunus on the sketch map. This designated the tomb of the Prophet Jonah according to Islamic tradition. Incidentally, Jonah is popular in the Muslim religion and there are several monuments to him. He is said to be buried at Nebi Yunus and at Mashad (Gath-hepher) in Israel. Some reports indicate that this tomb has been destroyed by IS.

At another time we may discuss some of the significant biblical events associated with Nineveh.

Yesterday I watched the 5+ minute video of the destruction of artifacts in the Mosul Museum. Later last evening I thought I would watch it again, but discovered that it had been taken down by YouTube. Excerpts are currently available at the BBC, the Daily Mail, and likely other news outlets.

We can be thankful that great collections from the ancient Assyrian Empire can be seen at the British Museum and the Louvre, with smaller collections scattered in other museums. To this thought Todd Bolen added, “where they are safe, for now.” Another friend wrote by Email, “If they [ISIS thugs] are not stopped, this could be coming to a museum or library near you!!”

I just came across a blog called Gates of Nineveh written by Christopher Jones, a Ph.D student in ancient Near Eastern history at Columbia University. Some of our readers might find this site helpful.

Update. Christopher Jones assesses the damage at the Mosul Museum. He identifies many of the pieces recently destroyed in a current post here. I have added this blog to my list of blogs I follow on the Scholarly Page of the Biblical Studies Info Page.