Philippe Bohstrom has a fascinating article this morning in HaAretz about the discovery of a harbor on the Red Sea and an archive of papyri dating to the time of Pharaoh Cheops (about 2500 B.C.).

The oldest known harbor in the world has been discovered by archaeologists diving off the Red Sea site of Wadi el-Jarf. The site was found near a huge archive of papyri – which is also the oldest known to date, and which describe how the harbor was built and used by the great King Cheops to import materials to build his flagship monument, the Great Pyramid of Giza.

The monumental harbor discovered under the waves at Wadi el-Jarf has been dated to 4600 years ago, right in Cheops’ time.

Cheops, also known by his Egyptian name Khufu, reigned from 2580 to 2550 B.C.E. He had the harbor erected 180 kilometers south of Suez, in the foothills of the desert mountains.

Many have been fascinated by the Great Pyramid (or Pyramid of Cheops – or Khufu), dating to about 2500 B.C. Perhaps we are not surprised to learn of this impressive shipping enterprise on the Red Sea. 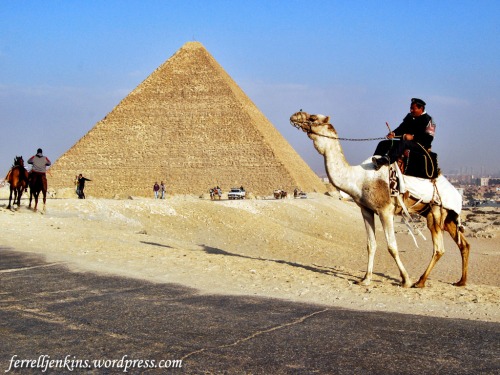 The Great Pyramid of Pharaoh Cheops (Khufu) at Giza. Photo by Ferrell Jenkins.

I encourage you to check Bohstrom’s article here with numerous photos and a map to locate the discovery on the Red Sea.

Again, I would remind our readers that the Pyramids of Giza were built long before the time of Abraham, and the later Israelites.