Discovery of first century ritual bath with inscriptions and drawings

The Israel Antiquities Authority announced Wednesday the discovery of a ritual bath (mikveh, miqwe) dating to the second temple period in the Arnona quarter of Jerusalem during the construction of a nursery school. Arnona is east of the Hebron Road and north of Ramat Rahel.

In the excavation an impressive ritual bath (miqwe) dating to the time of the Second Temple (first century CE) was exposed inside an underground cave. An anteroom, flanked by benches, led to the bath. A winepress was excavated alongside the ritual bath.

The walls of the miqwe were treated with ancient plaster and were adorned with numerous wall paintings and inscriptions, written in mud, soot and incising. The inscriptions are Aramaic and written in cursive Hebrew script, which was customary at the end of the Second Temple period. Among the symbols that are drawn are a boat, palm trees and various plant species, and possibly even a menorah. 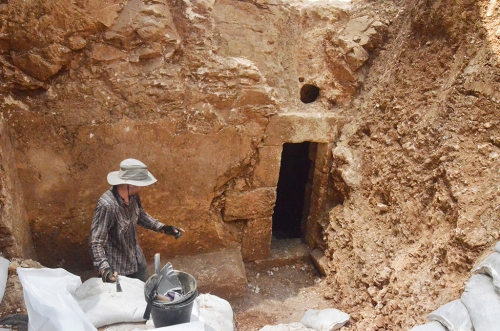 The entrance to the cave when discovered during an inspection by the Israel Antiquities Authority, prior to the construction of a neighborhood nursery school. Photo by Shai Halevy, courtesy of the IAA.

The IAA English press release with a link to 11 photos and a short raw video may be downloaded here. I will post just one more of the photos showing some drawings and inscriptions on the walls of the mikveh. [Added note: I have been informed that the news release I mentioned above does not have the photos and video. Here is a link to that material on Dropbox. I have no control over this material on other sites. If you would like to get 2.25 gig of Dropbox free, click here.]

Inscriptions on the walls of the ritual bath. Photo Shai Halevy, courtesy IAA.

Arutz Sheva includes all of the photos provided by the IAA and their own video of the mikveh. They point out that the claim that this mikveh dates to the end of the second temple period (by A.D. 70?) is indicated by the script, pottery, and coins.

Something I noticed in the IAA video that I did not see mentioned is that there are two characters depicted on the wall. In my knowledge this is not otherwise known as early as the end of the second temple period. In later centuries it became common to have humans depicted. Is it because this is not a synagogue? Comments by knowledgeable persons welcomed.

Now there were six stone water jars there for the Jewish rites of purification, each holding twenty or thirty gallons. (John 2:6 ESV)

Now a discussion arose between some of John’s disciples and a Jew over purification. (John 3:25 ESV)

Leen Ritmeyer reports on this discovery here and includes a couple of his drawings to help illustrate the find.

Many fascinating discoveries are made as a result of various types of construction work. Keep up the good work.