The Berlin Wall was erected August 13, 1961 as a dividing line between East and West Berlin. As soon as East Germans began to cross into the west people began to make an effort to tear down the wall. I crossed from West Berlin into East Berlin on several occasions when the wall stood in order to see the Pergamum Museum. In 1990 I joined others in my group in trying our hand at chiseling a few piece of the wall as souvenirs. The little hammer and chisel I “rented” from an entrepreneur didn’t do much to the hardest concrete I had ever seen.

Trying to chisel a piece of the Berlin Wall in 1990.

Some of our guys decided to go after the wall with a large concrete post. 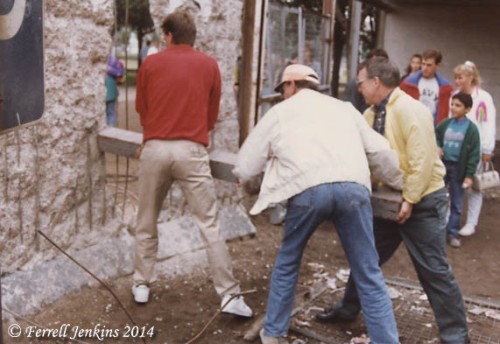 American tourists use a concrete post to dry to break through the Berlin Wall. Photo by Ferrell Jenkins.

Here is how it looked from the East Berlin side. Notice the rebar in the wall and  the lady holding souvenir pieces of the wall. 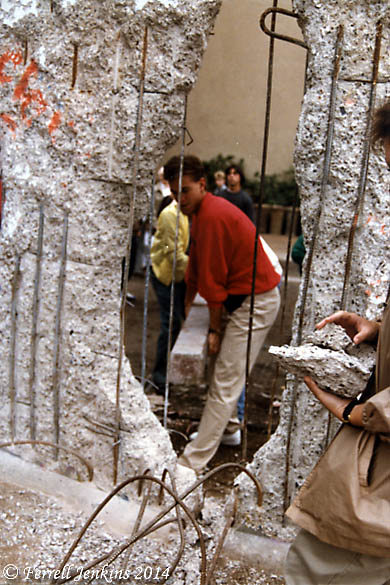 Trying to make a breakthrough to East Berlin. Photo by Ferrell Jenkins.

Before the wall came down we always went to the wall in West Berlin where we could see the top of the Brandenburg Gate above the 15-foot-high wall. In August my wife and I visited the beautiful gate as did numerous other tourist that day. The view is toward the former East sector and the famous Unter den Linden street.

The Brandenburg Gate in August, 2014. Photo by Ferrell Jenkins.

A short portion of the wall has been left as a reminder of the wall that once divided Berlin into East and West. 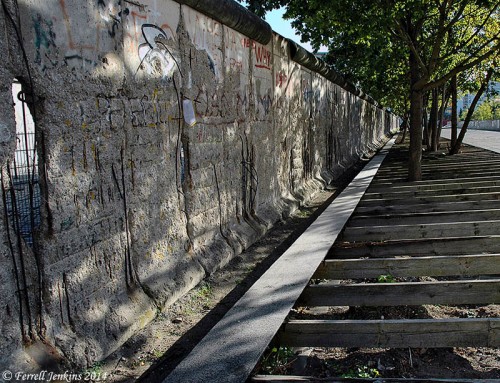 A portion of the Berlin Wall was left as a reminder of a sad time in the history of the city. Photo by Ferrell Jenkins in 2004.

Sunday, November 9, the city of Berlin is celebrating the 25th anniversary of the opening, and ultimate tearing down, of the Berlin Wall.

Would that all men could be free from oppression with the opportunity to pursue their dreams.