A new excavation at Amphipolis has revealed what the excavator and others think is a Macedonian tomb from the about 300 B.C. I have been following Carl Rasmussen’s HolyLandPhotos’Blog. He now has combined them into one here. In addition, he has called attention to the possibility of this tomb being similar to the one found at Vergina.

Here is a list of interesting articles, mostly with photos and drawings, to give you some idea of the exciting potential at Amphipolis.

The obvious answer is that it was most likely to have been built for Alexander, and either left empty when he was buried in Alexandria, or re-used for another Macedonian monarch – eg it could have become the tomb of Antigonus I Monophthalmus and the mausoleum of the Antigonids, for example.

Professor Rasmussen includes photos of jewelry and a golden oak wreath found in the area of Amphipolis.

Our photo below show the entrance to the Royal tombs at Vergina, a city located just a few miles from Berea, a city visited by Paul, Silas and Timothy (Acts 17:10-14). After the tumulus at Vergina was excavated a museum was built and then covered over to have the natural appearance. Notice the tumulus behind the ornamental fence. 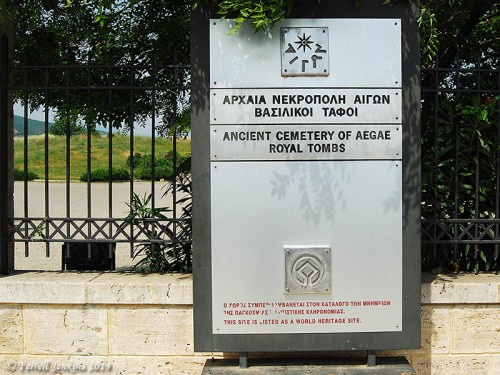 The Ancient Cemetery of the Royal Tombs at Vergina. Photo by Ferrell Jenkins.

Without the sign and ticket office one might pass this museum as just another rolling hill. In the photo below you see a sign on the left pointing to the entrance. The exit is near the center of the photo. The museum is filled with items of silver and gold and photography was not allowed when I was there. I am pleased to have a copy of Vergina The Royal Tombs, by Manolis Andronicos, given to me by a Greek guide and friend nearly 30 years ago. The book includes photos of the artifacts that are displayed in the museum. A popular theory says that this is the tomb of Phillip II of Macedon. One may only imagine the glory of the tomb of Phillip of Macedon, or Alexander.

The next photo by Sarah C. Murray shows a golden wreath suspended over a golden larnax. 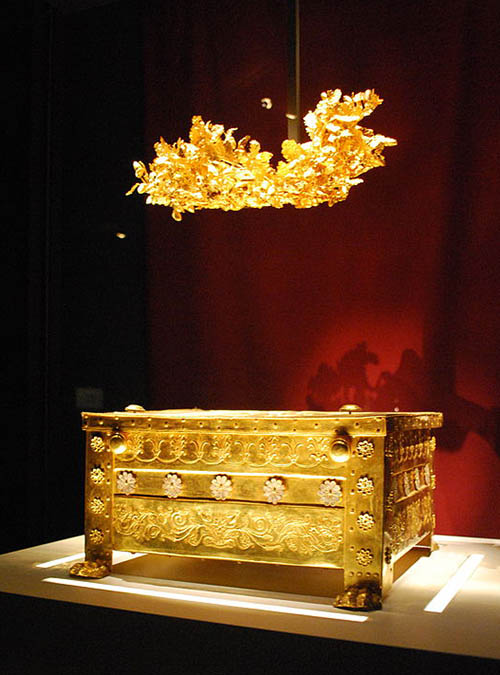