Getting ready for the Cappadocian balloon flight

When you rise early to take a balloon flight you never know if the winds will permit flying (or floating). An extra layer of clothing is advised, and it is a good idea to get a sip of juice or coffee and a bit of something to eat before leaving the hotel for the takeoff point.

The sunrise was beautiful that morning back in May. Here is one of the shots I made as we waited for a favorable wind.

A group of retired balloon pilots monitor the weather and make the decision whether and when the balloons will be able to lift off. As we waited, I wondered if the weather would permit the flight. Finally the “all clear” signal came and the crews began to inflate the balloons for flight.

Inflating a Balloon for Flight. Photo by Ferrell Jenkins.

One of the crew offered to take our photo as the basket of about 20 persons began to lift off. If I look a little apprehensive it is not concern over the safety of the flight (we had made this flight on a previous tour), but because the crew member had my new camera. Elizabeth and I did not have any gloves so we wore socks to keep our hands warm.

Taking Off for a Balloon Flight Over Cappadocia.

After about an hour of floating over the lunar-like landscape, we approach a landing site (lower left corner of the photo). On the road you see some of the crews with trailers and buses as they make their way to pick up the passengers and to prepare the balloons for the flights the next morning. 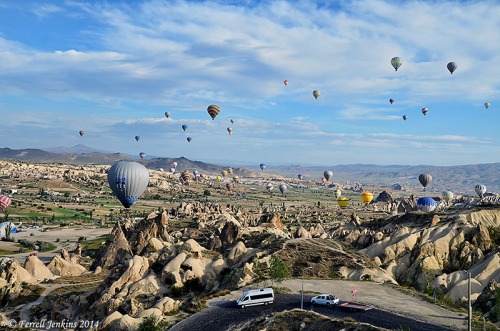 One response to “Getting ready for the Cappadocian balloon flight”