The Lechaion Road at Corinth

The Lechaion Road was the famous road that ran from the port of Corinth to the city. In Corinth the road was 20 to 25 feet wide, made of limestone, and flanked on either side by raised sidewalks and shops. The road ended at the agora which was directly to our back when we made the photo. 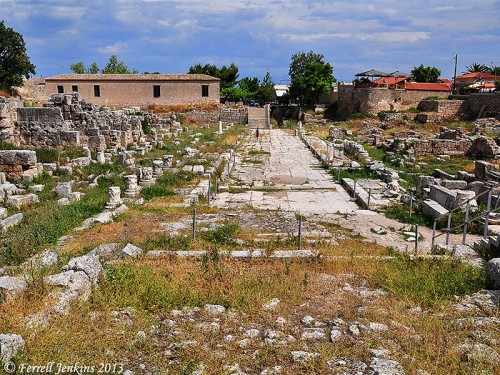 The Lechaion Road in Corinth. Photo by Ferrell Jenkins.

The Apostle Paul came to Corinth in the fall of A.D. 51 and remained until the spring of A.D. 53. During the eighteen months in the city he preached to both Jews and Greeks (Acts 18:1-4, 11).

A case can be made that there was a “lost letter” written by Paul to the Corinthians (1 Corinthians 5:9).

The document we call First Corinthians was written from Ephesus about A.D. 53/54.

Paul proposed a third visit (2 Corinthians 12:14; 13:1-2), which probably took place during the three month stay in Greece (Acts 20:2-3). We believe that Paul wrote the letter to the Romans during this visit. Romans was delivered to the Romans by Phoebe, a servant of the church at Cenchreae (Romans 16:1).

2 responses to “The Lechaion Road at Corinth”