The annual meetings of the American Academy of Religion and the Society of Biblical Literature were held this year at the McCormick Place Convention Center in Chicago. I think McCormick Place is the largest facility of this type that I have ever been in. Much walking was required to move between sessions. Fortunately there is a good system of escalators to move between levels of the facility.

With the two scholarly organizations meeting together the book exhibit is extremely large. It is impossible to show it all from floor level. Here is a little glimpse of the Baker Academic section.

David McClister, my former student and colleague at Florida College, looks over one of the map books on display in the exhibit hall.

I spent my time at the SBL sessions dealing with Places in the Bible World. I attended the session on Polis and Ekklesia: Investigations of Urban Christianity Consultation. The theme for the five speakers this year was Roman Corinth.

The Biblical Lands and Peoples in Archaeology and Text Section covered a number of subjects including Moab, Ammon, the Philistines, first century priestly house in Jerusalem (Shimon Gibson), the possibility of a priestly order at Migdal-Gennesar (Richard Notley), et al.

Another session featured studies on the Egyptian invasion of the Sea Peoples (James Hoffmeier), Tell Tayinat (Tim Harrison), Tel Dor (Elizabeth Bloch-Smith), Ashkelon (Daniel Master), and Gath (Aren Maeir). There were a couple of other reports on the Philistines that I did not hear. It is always good to hear these reports first hand, long before the reports find their way into journals and books. 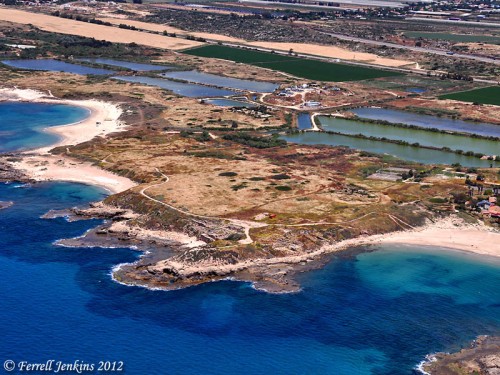 Aerial view of Tel Dor on the Mediterranean Coast. Photo by Ferrell Jenkins.

Dor has a long history extending from the Canaanite period around the 20th century B.C. It was also controlled by the Phoenicians, the Sea People, the Israelites, the Assyrians, the Babylonians, the Persians, the Greeks, and the Romans. Dor was abandoned in the third century A.D. (Biblical Archaeology Review, Nov./Dec. 2002).

It is nice to be back home with on time flights.