The Samaritians want the archaeological site at the peak of Mount Gerizim opened to the public.

At the peak of Mount Gerizim in the West Bank is a fenced-off archeological site, where a dig conducted under the auspices of the Israel Defense Forces Civil Administration recently uncovered a well-preserved 2,000-year-old city, once home to 10,000 people.

Although the site is off-limits to the public, the dig has revealed streets flanked by houses as well as a city center, all of which make it a potentially important tourist destination. The Civil Administration made a decision in May to keep the site closed to visitors, for the time being.

Mount Gerizim is a holy site to the Samaritan community, an ancient sect closely related to Judaism. According to Samaritan tradition, the mountain is the site of the ancient Tabernacle. The archaeological excavations at the site were undertaken in 1982, and continued for 22 years at an investment of tens of millions of shekels, revealing new finds on a daily basis.

Benny Katzover, who served for many years as head of the Samaria Regional Council, said the excavations began in an effort to find what the Samarians regard as their Holy Temple. Katzover said the ancient historian Joseph Flavius [Josephus] explained that, following disputes with the Jews, the Samaritans moved their spiritual center to Mount Gerizim, near what is now the West Bank city of Nablus, and built their temple on a scope identical to the one in Jerusalem.

“The finds,” he said, “reveal a high standard of living, including baths and ceramic tile and heating and mosaics… You can see that it was the capital of a whole kingdom.”

The article, in its entirety, may be read here.

Last December I visited Mount Gerizim. A fence surrounds the archaeological site and makes it impossible to get photos of specific areas. Here is a photo I made from the fence. 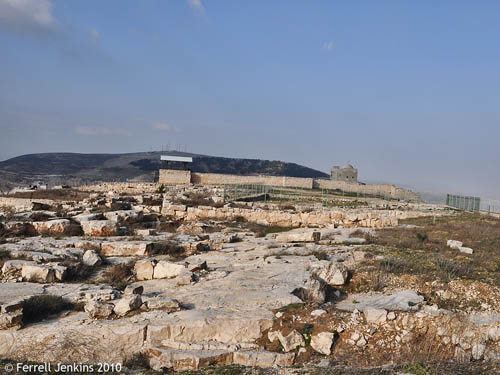 From another point it is possible to see Nablus below in the valley between Gerizim and Ebal. Click for a larger image. 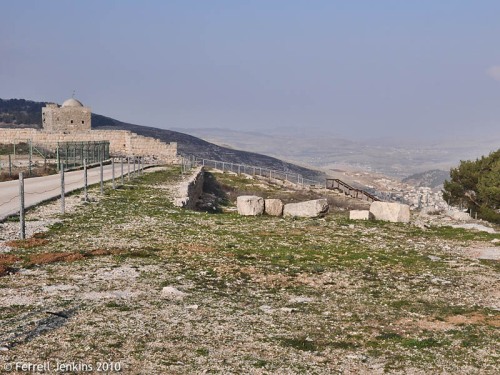 View of Nablus from Mount Gerizim. Photo by Ferrell Jenkins.

The blessings of the Law of Moses were read from the slopes of Mount Gerizim as the Israelites assembled in the valley between Mount Gerizim and Mount Ebal.

33 And all Israel, sojourner as well as native born, with their elders and officers and their judges, stood on opposite sides of the ark before the Levitical priests who carried the ark of the covenant of the LORD, half of them in front of Mount Gerizim and half of them in front of Mount Ebal, just as Moses the servant of the LORD had commanded at the first, to bless the people of Israel. 34 And afterward he read all the words of the law, the blessing and the curse, according to all that is written in the Book of the Law. 35 There was not a word of all that Moses commanded that Joshua did not read before all the assembly of Israel, and the women, and the little ones, and the sojourners who lived among them. (Joshua 8:33-35 ESV)