A recent article in Haaretz, and several other sources, says new information indicates that the great pyramids of Egypt were built by free workers, rather than slaves.

Tombs discovered in recent years near the Great Pyramids in Egypt may reveal that the builders of the famed monuments were free workers, rather than slaves, as is commonly thought. The discovery of the tombs also showed that the workers received pay, food and lodging near the construction site, the Egyptian Antiquities Ministry said yesterday.

Egyptian archaeologists said they found evidence of settlements near the pyramids of Khufu and Khare, at Giza near Cairo.

Popular culture has long depicted slaves toiling away in the desert to build the mammoth pyramids only to meet a miserable death at the end of their efforts. The new tombs, which are approximately 4,100 years old, may dispel these myths.

“These tombs were built beside the king’s pyramid, which indicates that these people were not by any means slaves,” Zahi Hawass, the chief archaeologist heading the Egyptian excavation team, said in a statement.

Hawass said evidence had been found showing that farmers in the Delta and Upper Egypt had sent 21 buffalo and 23 sheep to the plateau every day to feed about 10,000 builders.

The builders were rotated every three months and those who died on the job were buried in these tombs.

The full report is here. 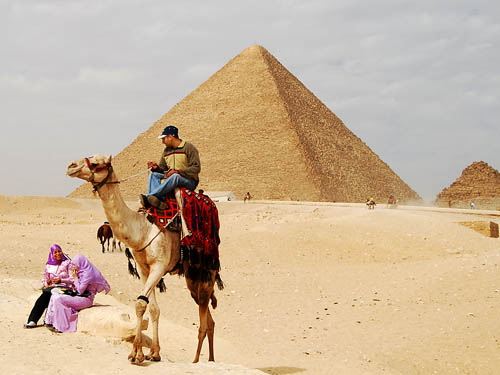