Most first time visitors to the Western Wall in Jerusalem, whether in 1967 or 2009, probably think they are looking at a wall seen by Jesus and other first century characters prior to AD 70. In a sense they are. That is, they are seeing the same wall, but not at the first century level.

The Western Wall is the western side of the temple platform enclosure built by Herod the Great. Jesus drove money changers out of the temple precinct (hieron) (John 2:13-17). In their discussion with Jesus the Jews called attention to the length of time the temple (naos) had been under construction (John 2:19-21).

The photo below shows the largest visible stone in the western side of the Temple precinct. According to the Western Wall Tunnel web site, this stone is the largest one in the tunnel. It is 41 feet long, 11.5 feet high, and 15 feet deep. The web site says that this stone is 20 feet above the street level of the first century. 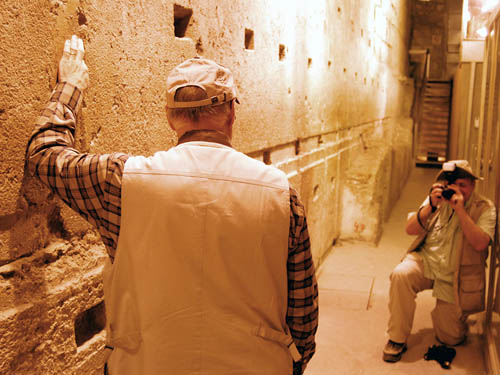 The largest visible stone in the Western Wall tunnel. Photo by Ferrell Jenkins.

The Tunnel was dug in the years following 1967, but an exit was not cut on the north end until 1996.